Posted on October 1, 2019 by ConsumerProtect.com

Each year, tens of thousands of people tragically die in traffic accidents. By the latest count, almost 37,000 people died last year in automotive accidents. Many of those people were pedestrians who were hit by cars. Others were passengers or drivers. Among children age 8 and older, motor vehicle accidents are the leading cause of death.

Still, some strides have been made to reduce vehicle deaths.  Because of airbags, seat belts, and improved automotive technology, cars are generally safer today than in prior decades. Moreover, some municipalities are redesigning their roads to make them safer for both drivers and pedestrians.

So where are the roads most dangerous in America? We decided to analyze the latest data available from the National Highway Traffic Safety Administration (NHTSA) on the rate of traffic fatalities in states and cities across America.

Among states, we found that Mississippi has the highest rate of traffic fatalities in the country, while New York has the lowest. When it comes to pedestrian deaths by vehicle, however, New Mexico is the most dangerous state. Wyoming has the highest rate of alcohol-related traffic fatalities in the country. When it comes to wearing seat belts, Hawaii leads the nation with a 97.8% compliance rate. New Hampshire is last in the nation when it comes to seat belt safety as only 76.4% buckle up in the “live free or die” state.

Among cities analyzed by the NHTSA, Baton Rouge, Louisiana has the most traffic fatalities while Oxnard, California has the least. If you only look at the fifty largest cities, Kansas City, Missouri is the most dangerous and New York City is the least.

The NHTSA is a governmental organization tasked with creating and enforcing automobile standards. As part of its mission to “Save lives, prevent injuries, reduce vehicle-related crashes” the agency releases traffic fatality data on an annual basis. On a state and city level, the most recent data available is from 2017, which we have analyzed in this report.

To begin, let’s look at the states that are most dangerous when it comes to motor vehicle-related deaths. The chart below shows the number of traffic fatalities per 100,000 living in each state. 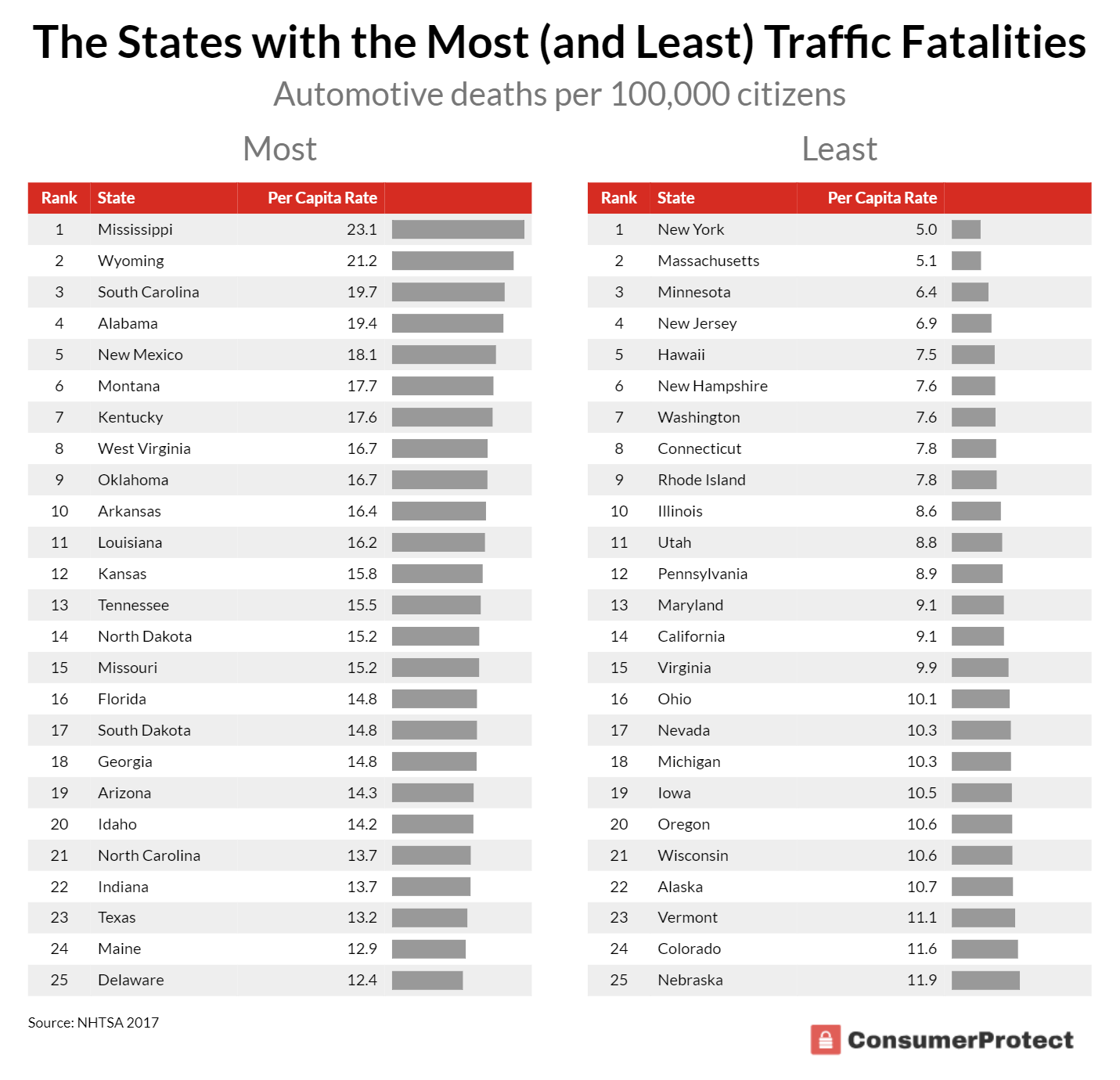 By a considerable margin, Mississippi is the most dangerous state when it comes to automotive fatalities. In Mississippi, there are 23.1 auto-related deaths per every 100,000 people living there. In Mississippi, the probability of dying in a motor vehicle accident is nearly 5 times as high as in New York, the state with the lowest death rate.

According to the CDC, rural roads tend to be much more dangerous which helps explain why states like Mississippi and Wyoming top the rankings. On the other hand, states, where a lot of the population live in an urban center like New York, tend to have safer streets on average.

However, the rural-urban divide only explains part of the divide when it comes to deaths in car crashes. Another factor is that there is considerable variation in how likely the population is to embrace life-saving safety measures like wearing a seatbelt. 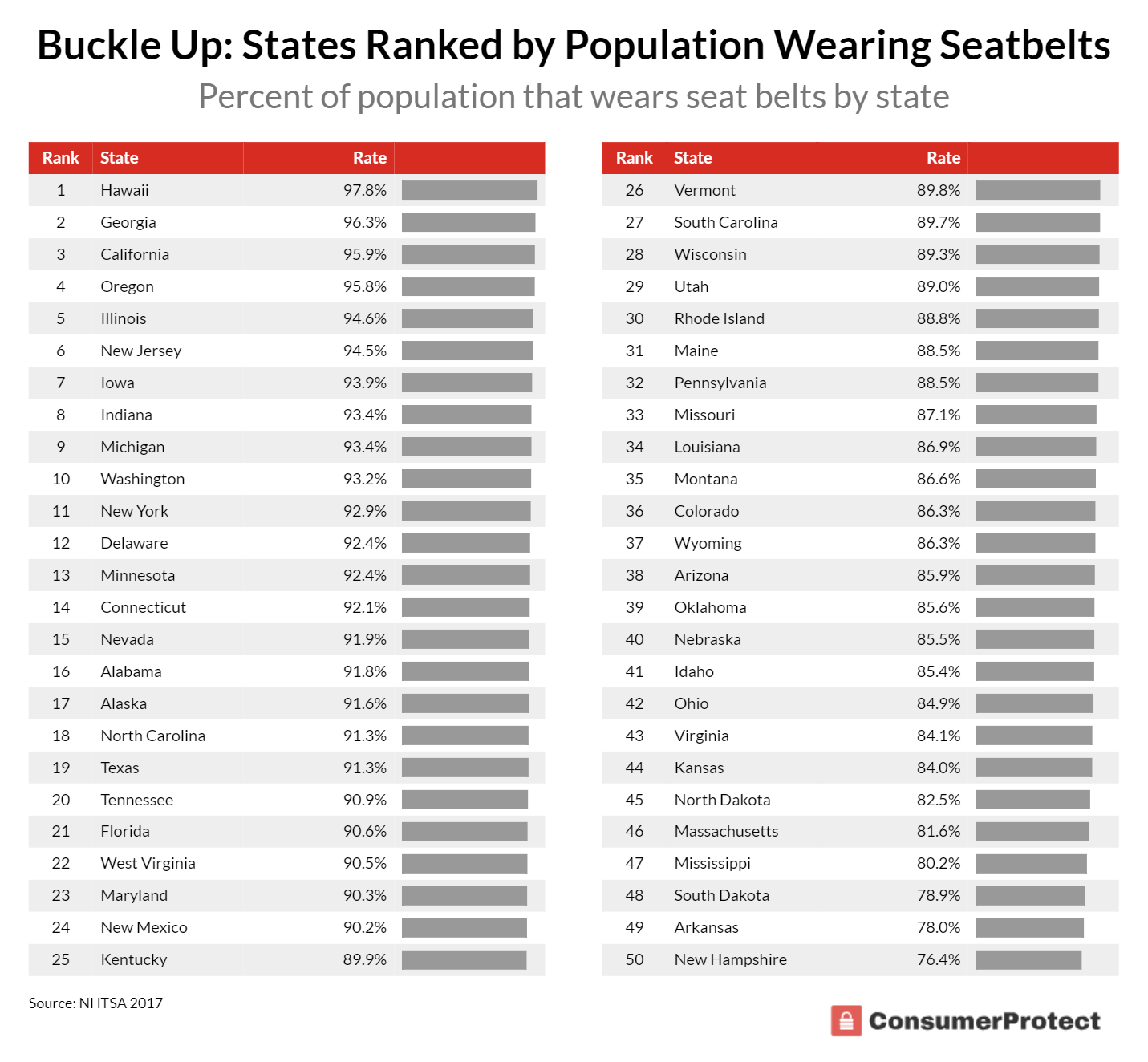 Part of the reason a place like Mississippi has high traffic fatality rates is non-compliance with wearing seatbelts. In Hawaii, the state with the highest seat belt rate, 97.8% of people wear their seatbelts. In contrast, Mississippi has the 4th lowest seat belt rate at just 80.2%.  Of note, New Hampshire is the only state in the country that does not require wearing seatbelts and therefore ranks last on this metric.

Seatbelts are just one safety measure that can be embraced or rejected by the population. Another measure to consider is the prevalence of drunk driving. The following chart shows the rate of motor vehicle deaths that involved a positive blood alcohol concentration (BAC) by state: 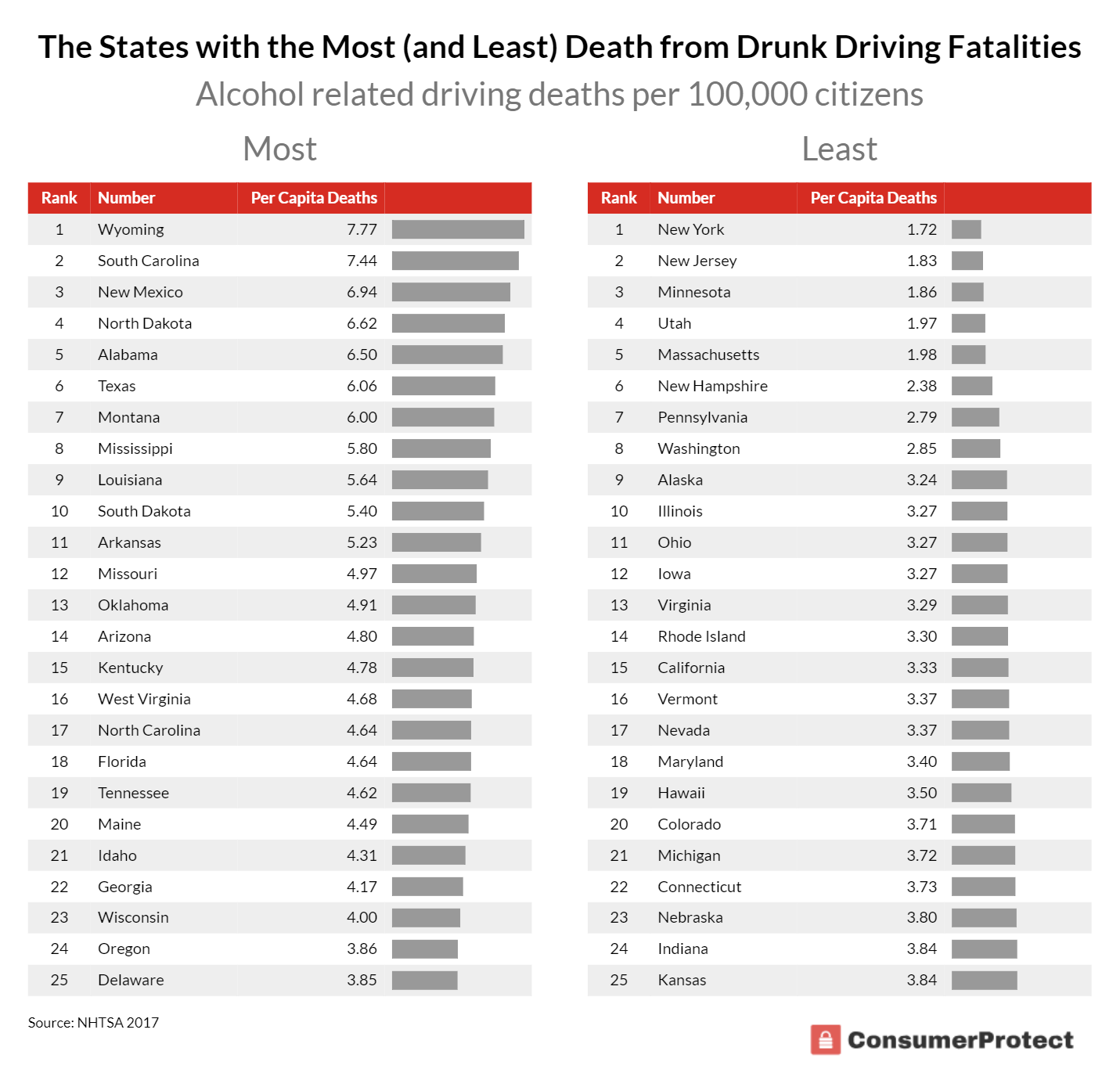 Next, let’s look at how prevalent driving deaths are in cities across America. As mentioned before, roads in cities are generally safer than rural environments because speeds are lower and there is better lighting. That said, as the below chart shows, not all cities are equally safe: 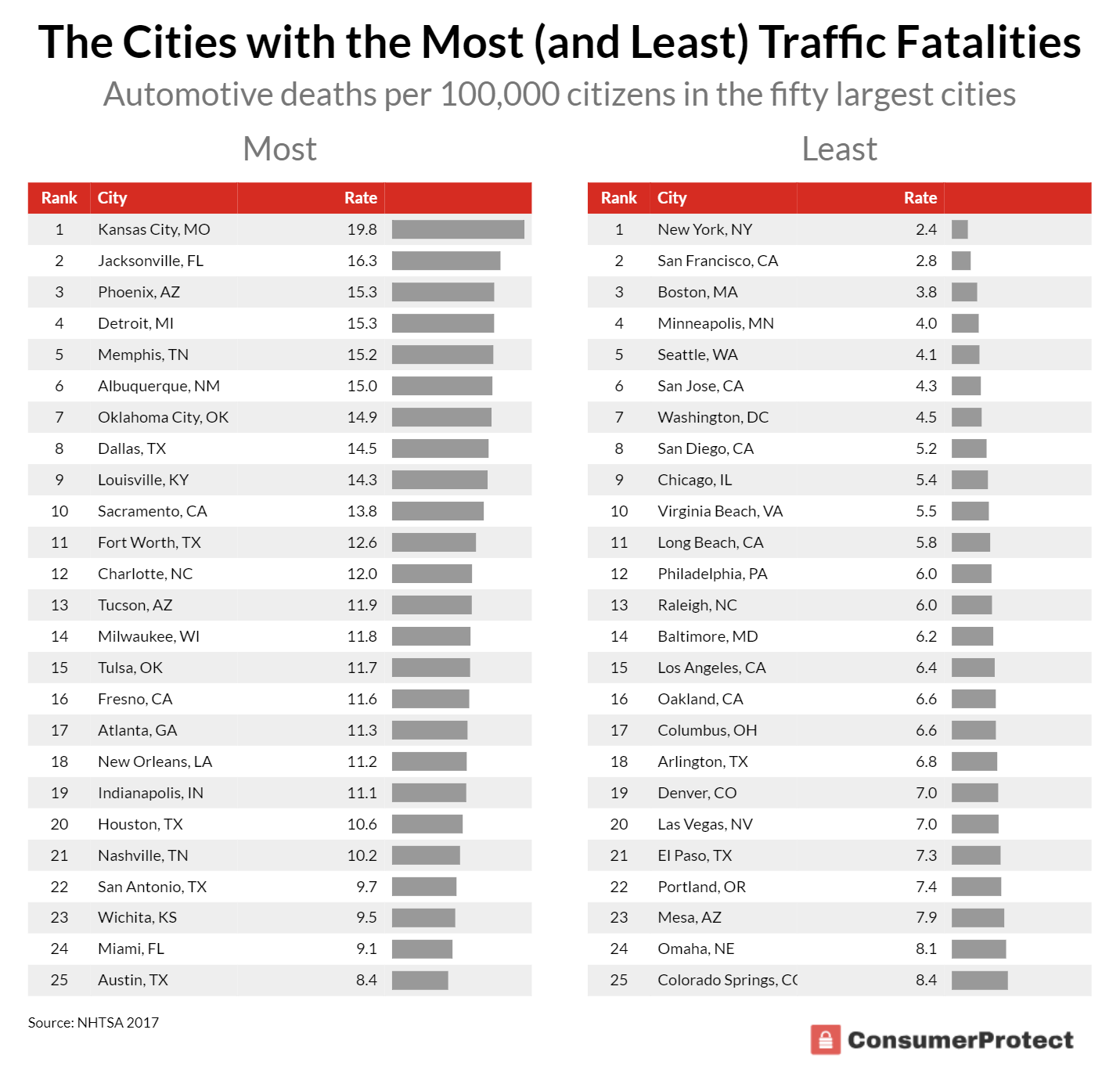 Major cities do have one factor that makes automobiles potentially more dangerous than in rural environments – plenty of pedestrians. The following data shows the major cities with the most and least pedestrian deaths. 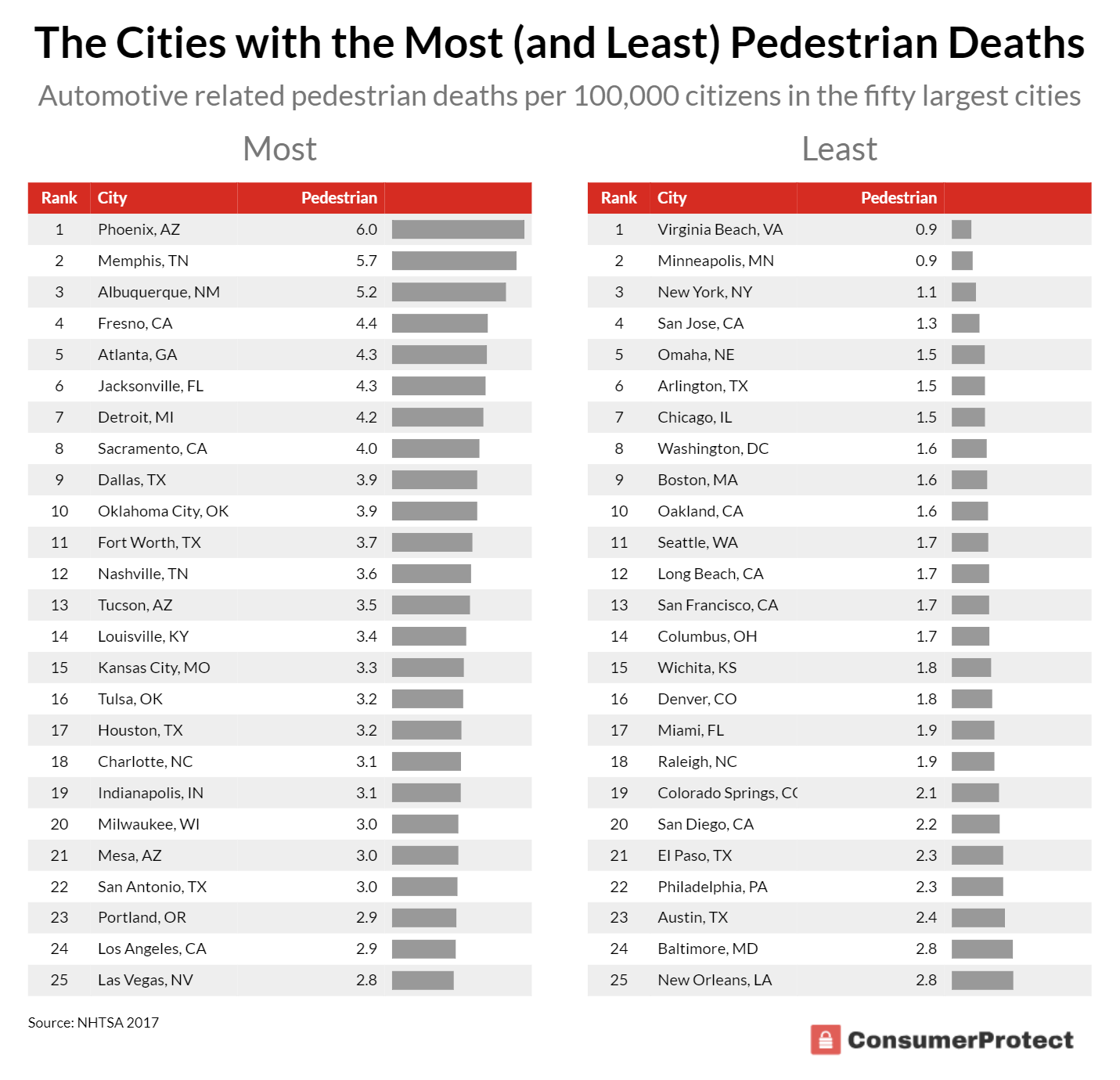 Among major cities, Phoenix has the most pedestrian deaths in the country with 6 per 100,000 residents. Additionally in Phoenix, pedestrian deaths are estimated to have risen 15% in the last year and the city has been criticized for failure to fix “hotspots” for pedestrian deaths. On the other hand, Virginia Beach leads the country in having the lowest pedestrian death rate among larger cities, followed by Minneapolis and New York City.  As cities like New York embrace “vision zero” (zero traffic-related deaths), the data indicates they are moving in the right direction over the long term.

Automobiles can be lethal. They are extremely heavy and are capable of moving at extraordinary speeds. A moment of distraction from a driver or a poorly designed intersection can easily result in death. In the United States, traffic fatalities are much more common than in others. Mississippi, Wyoming, and South Carolina lead with the highest fatality rates. These states also tend to have lower rates of seat belt wearing and higher rates of drunk driving, indicating that many of these deaths are completely preventable.