Insurance fraud is often seen as a victimless crime, but it’s not. When an insurance company is defrauded, people who honestly pay their premiums are the ones who suffer, as their insurance costs go up. In 2009, insurance companies lost an estimated $30 billion per year, which all had to be recuperated from honest consumers.

It is possible for you to play a pivotal role in stopping insurance fraud. Always contact your state department of insurance with any details you may have about a fraud that you have witnessed, even if you are not the direct victim. Below are the 10 most common types of insurance fraud. By being aware of these, you will also be able to help prevent them.

Criminals use a stolen car insurance scam in two different ways. First, if a legitimate owner sells the vehicle to a body shop for parts, it could be reported as stolen. The body shop tends to be in on the scheme, which means that the authorities do not know the parts are even sold. Another way is to simply hide the car and then declare that it was stolen. The insurance company would not be able to force the car owner to return the money after the car is found.

If you ever spot a car accident, you may have actually witnessed insurance fraud happening. Many accidents are staged, whereby the victim and the driver are actually accomplices. Sometimes, the scheme is even larger and involves witnesses and insurance investigators as well. This is rare, but it does happen. In these large scale schemes, the value of the vehicle that caused the accident, and the vehicle that was involved in the accident, are usually inflated greatly. The cost of damage is inflated as well, meaning the insurance company will write off the vehicles and pay for their value. The money is then used to repair the vehicles so the fraud can be committed again, and the rest of the money is spread between those involved in the scheme.

Any type of fraud is, of course, illegal and it also damages the insurance company. Sometimes, people report a small accident and then receive an estimate to have the car fixed. The money they receive is then not used to repair the vehicle. This is by far the most common form of insurance fraud and it must be said that some people commit it without even realizing that they are actually being fraudulent. They feel that there is no harm done and that the money can be spent on better things than some cosmetic repairs. In reality, however, it is this type of fraud that actually makes all other people’s premiums rise year on year.

Sometimes, health professionals also get in on fraudulent schemes. For instance, they may bill health insurance companies for work that wasn’t done, or for unnecessary work, or they may inflate the prices for services that they rendered. For instance, a patient may visit a physician for a regular checkup, but the doctor then bills the insurance company for an in-patient surgery. In so doing, the patient is actually the victim of fraud, but he or she will never know about it.

If you feel that your physician is constantly ordering tests for you that you do not quite understand, you may be a victim of insurance fraud. For instance, if your arm is sore and you are told that you need a variety of blood and stool tests, which seem unrelated to your problem, this could be fraud. This is unfortunate, but it is also very common.

This is one of the most dangerous forms of fraud and it has actually cost some people their lives. Insurance companies pay out billions of dollars every year for home insurance, and often it is because of fire. Sometimes, the fire is staged and sometimes it is done through vandalism. In a staged fire, homeowners will usually remove any items of value and keep their family away before causing a fire. Alternatively, they insure certain high value items first, and then cause the fire.

With staged home fires, the homeowners themselves are usually not at home. They also generally have a sound alibi for their actual whereabouts. This is because they will hire a criminal to start the fire, often also staging a break-in first. This makes it look as if the homeowner has been the victim of a serious crime. It is important to understand, in this case, that the insurance fraud is a criminal offense, but so is arson, which carries very heavy sentences.

Whenever a heavy storm happens, the number of claims for storm damage goes up. While many of these claims will be genuine, a number of them will be fraudulent as well. Property owners may, for instance, declare higher damage costs so that they can receive a higher settlement. Alternatively, they may even put in a non-existent claim, guessing that the insurance company is too busy to come and check the damage, particularly if it is quite minor.

Interestingly, this is one of the most common types of fraud in terms of homeowners insurance. It happens for a range of different reasons, but they are almost always fraudulent. For instance, homeowners may have difficulties selling their properties when they have to move to a different city for work. Alternatively, a landlord may be struggling to rent out properties in an unpopular neighborhood.

Whenever an abandoned house burns down, there is always a fire inspector on site. Insurance companies are very suspicious of these types of occurrences, because they are so common. It also makes other people’s insurance premiums rise significantly. Furthermore, it endangers anybody who lives in the properties adjacent to the abandoned house.

This is a very surprisingly common type of fraud. It has been made famous in movies, books and television shows. Essentially, fraudsters will take out an insurance policy on their own life, making their spouse the sole beneficiary. After a few months, the con artist will fake their own death, and the spouse will receive the benefit. After the funeral, the spouse will suddenly disappear and move abroad, and the spouses reunite and make use of the claimed money.

Those who rent apartments and homes can also commit insurance fraud. They will usually take out a renter’s insurance policy, which is very affordable, to cover their belongings. Before they move out, or when their finances turn sour, the renters will sell their possessions without leaving a paper trail. Afterwards, they will report them as stolen and collect the insurance money.

Insurance fraud affects people all over the country. If your car insurance premium rises, then this will usually be because other people committed insurance fraud. If you know that fraud is being committed, you should immediately report it to your state department of insurance. 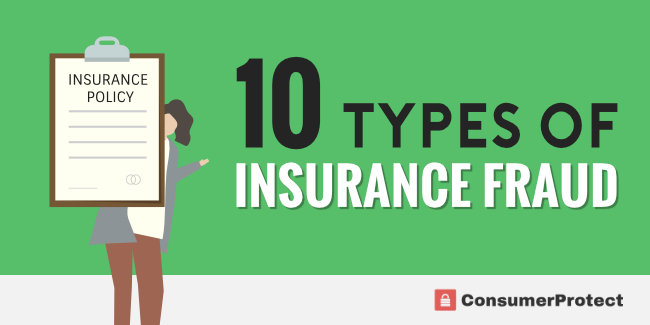