A Philidelphia jury this week ordered Johnson & Johnson to pay $8 billion in punitive damages over a drug that plaintiff’s lawyers say is connected to the growth of female breast tissue in boys. (NBC.com)

J&J immediately criticized the verdict after the decision of the jury in the Court of Common pleas. The company stated it is an excessive and unfounded award and vowed to overturn the ruling as soon as possible.

At the center of the lawsuit is the antipsychotic drug Risperdal. The plaintiff’s attorney argues that it is linked to the abnormal growth of female breast tissue in boys. This is an incurable condition called gynecomastia.

According to attorneys Tom Kline and Jason Itkin, J&J used a well-orchestrated scheme to make billions of dollars as they illegally marketed and sold the drug.

Kline and Itkin said that J&J is a company that values making money over the safety of patients. Thousands of personal injury lawsuits have been filed over the drug. But attorneys say this was the first time a jury decided to award punitive damages and reached an actual figure.

J&J stated that it believes the award will be overturned on appeal. The company said the punitive damages award was ‘grossly disproportionate’ with the compensatory damage award an obvious violation of due process.

Johnson & Johnson also said the court’s failure to include key evidence left the drugmaker unable to provide a strong defense, including what they claimed was a drug label that clearly outlined risks related to the drug. They added that the plaintiff’s attorneys did not present evidence of actual harm.

The company stated the decision is inconsistent with several court decisions outside Philidelphia regarding the quality of the Risperdal labeling, the efficacy of the drug, and the findings in support of Johnson & Johnson.

At the center of the lawsuit is Nicholas Murray. The boy was given Risperdal at age 9 for off-label treatment – to help with sleeping problems related to his autism. But soon, Murray found that he was growing breasts after he began to take the antipsychotic drug. He then sued Johnson & Johnson in 2013, saying the healthcare company did not warn physicians of Risperdal’s side effects. (Washingtonpost.com)

Beginning in 2003, Murray, who lives in Maryland, was first given Risperdal, an antipsychotic drug that is used to treat schizophrenia and bipolar disorder. It also is useful in treating irritability related to autism. FDA did not give approval for the drug to be used in children until 2006. But his doctors said giving the boy the drug would help with his sleeping troubles.

While Risperdal can help with some mental health problems, Murray’s attorneys argued that it could cause hormonal imbalances with higher levels of a hormone called prolactin. In men, the presence of prolactin can cause female breast tissue to develop, as it did with Murray. His mother stopped giving him the drug in 2008.

In his lawsuit, Murray, now 26, alleged that he began to develop breasts after his physicians prescribed him Risperdal off-label in 2003. Doctors can prescribe drugs as they see fit, but companies only may promote drugs for the uses approved by FDA.

Attorneys for Murray and Johnson & Johnson disputed whether the manufacturer of Risperdal was aware of the relationship between the drug and the disorder and whether they had properly talked about the risk to physicians and clients.

Lawyers for the plaintiff pointed to a label from 2002 for the drug. Janssen said risks were rare. The link to gynecomastia was reported to be 1 in 1000. But another label in 2006 stated the risk was higher. Risperdal can cause prolactin levels higher than other drugs in its class. One study found the rate of gynecomastia in patients is 2.3%.

A law professor at the University of Richmond named Carl Tobias told the media last week that the high amount of punitive damages, in this case, is about sending a stern warning to the pharmaceutical industry. It is likely it will be lowered when the appeal is filed.

The ruling against Johnson & Johnson is just one of the latest legal headaches for the consumer healthcare company. J&J has faced thousands of lawsuits over its Baby Powder containing asbestos fibers. Some consumers allege the presence of asbestos in the talcum powder caused them to develop ovarian cancer or mesothelioma.

J&J has been ordered to pay hundreds of millions of dollars in several verdicts so far, with thousands of cases still pending in state and federal courts. 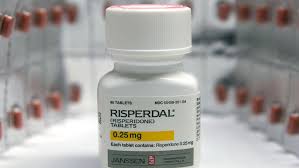