Before they’re even in middle school, the average American child has a smartphone and at least one social media account. More than any other generation before them, today’s young people are digital natives, using the internet, online gaming and joining social networks on a regular basis from a very early age. That’s why it’s crucial for parents to monitor their child’s access to social media and take steps to ensure kids are using social media wisely and safely.

While there’s no doubt social media provides many benefits to users, for children, such platforms pose perhaps as many problems as potential good sides. While kids can have fun with their friends and learn about topics that excite them, there’s also the opportunity for them to see content they’re too young for or — every parent’s nightmare — fall prey to those who would take advantage of their youth.

The wild popularity of social media platforms that are accessible to virtually anyone means that due to sheer numbers, the chances of children encountering something potentially dangerous or upsetting is elevated beyond what it would be without that constant access to people around the world. A child’s sphere of influence becomes exponentially larger the moment they log on.

That’s why it’s crucial for any parent, grandparent or caregiver to understand the risks associated with kids using social media and to use common-sense tools and practices to keep children safe while they like, share and post.

What Sites Are Kids Using?

YouTube is by far the most popular site among teens, though the shift away from Facebook is a fairly new one. According to the Pew Research Center’s previous study on this topic, 71 percent of teens used Facebook just a few years ago, making it the most popular social site for teens at the time. As Facebook has fallen, YouTube has risen. But new sites and platforms crop up seemingly every day. Here’s a look at some of the other sites and apps kids are using in 2019:

While many of these sites aren’t explicitly meant for social networking, they all can be used that way, and kids often use them for texting and communicating with people as a means to avoid the apps and tools their parents have banned.

Pew’s study found that 45 percent of teens are online basically constantly, and 95 percent of them own a smartphone or have access to one.

How Are Kids at Risk?

Each social site or app presents its own unique risk, depending on the feature set included in the app or site. But generally, children can be put at risk in any number of ways on social media, including:

How Can You Keep Kids Safe on Social Media?

Most American adults and teens use social media, so it’s clear most of us see value and benefits in continuing to use these sites and apps. But it’s necessary for parents to set rules, establish boundaries and decide what is appropriate online behavior for their children.

Here are some ways parents can keep their kids safe on social media:

It can be difficult to keep up with the changing times, particularly with regard to technology and young people, but parents must be vigilant, as the risk of serious trauma is very real. 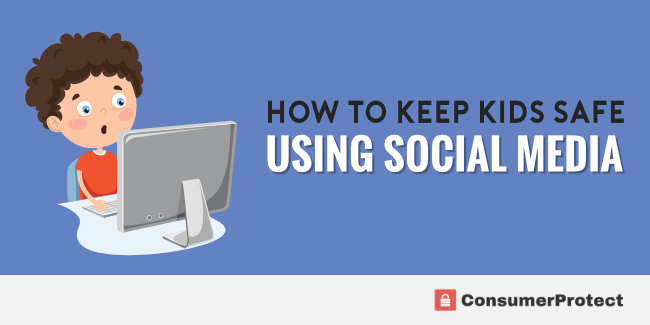