Card cracking scams are on the rise, and they have very serious repercussions. The scams tend to target young adults in particular, such as newly enlisted military personnel, students and single parents. These people are enlisted to commit fraud against their bank. Usually, con artists target their victims using social media, and through elaborate ploys, convince them to share information about their bank accounts. In return, they are promised some sort of kickback. The kickback tends to be a counterfeit check that is deposited remotely, promising that the consumer will be allowed to keep a certain percentage of the amount that is deposited. Banks take several days to find out that the check is counterfeit. By this time, the con artist will have removed the money (usually all of it, including the percentage promised to the victim), and the victims are left with a debt to their bank.

In a different version of the scam, fraudsters convince their victims to part with their debit card and PIN number, telling them that they should report the card stolen. The story is that if they report it as stolen, any withdrawals are covered under Reg E, meaning they will get their money back. The fraudster cleans out the bank account and it is only afterwards that the victims find out that they will not be able to recover their money at all.

Card cracking is something that affects everybody all over the country. However, it is currently most common in Illinois, Washington, Ohio and Georgia. Some notable news reports include:

The Chicago case made international news. The rapper and his 28 co-conspirators stole about $6.5 million through their scheme. This is the biggest case to date.

The American Bankers Association (ABA) conducted a study between July and August 2014. In it, they found that those responding to the survey had experienced a total of over $18 million in successful and unsuccessful card cracking attempts since January 2013. Actual losses came to over $6 million, and this was across 2,600 different cases of card cracking.

It was also found that the majority of victims who fall for this scam do not realize that they are actually committing a crime. The truth is, if convicted, they could face as much as 30 years in prison just for taking part in it. Being charged as an accomplice to a crime is a very serious offense. Besides facing fines, a possible jail term and a criminal record, people also stand to lose all of their savings, as well as falling into debt because others steal money from their account or make unauthorized purchases. The big problem is that the victim actually consented to the scammers having access to their financial accounts. As a result, it is almost impossible to demonstrate that any purchase or withdrawal was not, in fact, authorized. If the victims do claim that their cards were stolen or lost before any withdrawals or purchases, the bank is responsible and accountable for any money that was looted or lost. However, scammers are incredibly clever in this particular con, so they will generally make sure all of the money has been removed before someone reports the card stolen.

Banks obviously have to protect themselves as well. As such, they must raise their own internal awareness of the fact that this fraud is now very commonplace. As such, they are working at methods of better detecting and monitoring this type of fraud. Many banks are currently developing specific response plans that aim to address this issue. Not just that, however, but they must think of ways to provide education to their clients so that they learn to understand that this is a scam and that they will be out of pocket and in potential legal difficulties if they fall for it. Because the scam targets young people in particular, however, this can be very difficult.

Tips to Protect Yourself

The ABA has come up with a number of tips that can help consumers to protect themselves, avoiding becoming involved in what is a serious crime. The tips are: 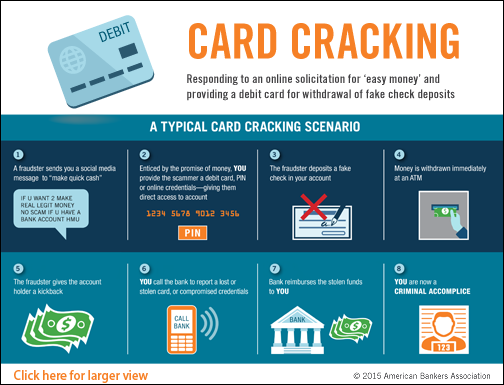