Zofran, also known as ondansetron, is a drug that is only available on prescription. It is designed to help treat or prevent vomiting and general nausea. It is an anti-emetic type of medication, as well as a 5HT3 receptor antagonist. Essentially, the drug blocks the serotonin neurotransmitter in the parts of the brain where nausea and vomiting are triggered. Zofran, which is a brand name, was initially manufactured by GlaxoSmithKline. It was the first drug in its class that was available and it was approved by the FDA (the U.S. Food and Drug Administration) in 1991.

The drug was approved by the FDA solely for the treatment of nausea and vomiting in patients who have had radiotherapy, chemotherapy or surgery. However, it is also used for unapproved, off label uses, including children with stomach problems and pregnant women experiencing morning sickness. NVP (nausea and vomiting during pregnancy) is experienced by about 80% of women. Some women experience hyperemesis gravidarum, which is the most serious form of NVP. This can cause dehydration and malnutrition, which will ultimately harm both the mother and her unborn child.

GlaxoSmithKline quickly recognized a new market for their drug, and they started to advertise Zofran to doctors and mothers to be as a method of combating NVP and hyperemesis gravidarum in particular. NVP tends to be the worst during the first trimester, which is when the baby is developing. Quickly, women started to rely on Zofran in order to be comfortable during those first few months. GlaxoSmithKline made hundreds of millions each year from this drug, with around a million pregnant women in this country alone taking it. Meanwhile, it must be remembered that the FDA never approved the drug for this purpose.

Unfortunately, over the past number of years, various studies have started to emerge that link Zofran to congenital birth defects. Many lawsuits have been started against the manufacturer by women whose children have had significant physical and mental deformities. They are claiming, in both individual and class action lawsuits, that they were lied to and misled by the manufacturer about the risks and safety of the drug.

In 2012, GlaxoSmithKline (GSK) entered a guilty plea to federal fraud and illegal promotion charges involving a number of different drugs. One of those was Zofran. They were ordered to pay $3 billion to settle. However, the company has recently gone back to court to defend themselves against very specific allegations relating to ondansetron.

It is believed that GSK had known Zofran to be dangerous since 1992, and that it presented ‘unreasonable risk of harm’ specifically to babies in their first trimester of growth. This is because the drug is able to pass through the placenta. Yet, despite being aware of this, pregnant women continued to be a main target demographic for Zofran marketing efforts.

A number of claims have been asserted against the company over Zofran. These include:

• GSK did not uphold their duty to determine whether or not their product was safe before marketing it.
• GSK did not warn the public about the potential side effects of the drug.
• GSK advertised the product as safe for women with hyperemesis gravidarum without FDA approval.
• GSK misrepresented findings of animal studies, claiming the drug was safe when signs of toxicity and abnormal bone growth were actually discovered.
• GSK did not evaluate the safety information and other data properly in relation to pregnant women.
• GSK developed a drug that is defective.

To this day, the FDA has never approved Zofran to be used by pregnant women. Yet, it is a known fact that GSK has marketed it specifically towards them and it has been alleged that physicians were paid to prescribe it. GSK will have to answer these questions in court.

Some pregnant women suffer from hyperemesis gravidarum, which is considered to be harmful for both mother and unborn child. Thus, many women have turned to Zofran, believing it to be the only way for them to protect their health and that of the unborn baby. In reality, however, many babies were born with serious and severe birth defects, which has led them to be permanently dependent on care. Some of the birth defects include:

• Atrial Septal Defect, also known as hole in the heart or other heart defects
• Cleft lip and cleft palate
• Club foot
• Craniosynostosis or deformities of the skull

The FDA frequently updates their ondansetran warnings, with the latest having been released just a few weeks ago. Zofran has been approved as a drug to treat nausea and vomiting, but only in patients who have undergone chemotherapy or radiotherapy, or who are experiencing nausea after surgery. In each warning, the FDA mentions that the drug should not be used off label on pregnant women. They highlight that there are now numerous studies that have demonstrated that there is a link between the drug and congenital cardiac malformations, as well as cleft lip and palate. Hence, an official warning has been issued.

Other warnings have also been released by the FDA. One of these is that some women developed an electrolyte imbalance because of severe vomiting and/or nausea. There is also a risk of developing Serotonin Syndrome, which is a triad of behavioral or cognitive changes, including agitation, confusion, neuromuscular change and autonomic instability. This is another reason why Zofran should not be taken by pregnant women.

There is only one medication that is currently available on the market that has been approved by the FDA for the treatment of morning sickness, which is Diclegis. Diclegis contains pyridoxine hydrochloride and doxylamine succinate. This is a Category A drug that is available on prescription only. It is a safer alternative for women who experience morning sickness.

Research on Fetal and Maternal Safety when Taking Zofran

The Slone Epidemiology Center in Boston, MA, conducted a large control study together with the Centers for Disease Control and Prevention in Atlanta, GA. They were able to demonstrate that there is a twice as large chance of babies developing a cleft palate if their mother took ondansetron during the first trimester of safety.

The FDA issued its first official warning about torsade de pointes and serious QT prolongation in September 2011. These warnings were specifically addressed to people taking ondansetron. Since then, physicians have been strictly regulated in as such that they must follow up patients who have been prescribed the drug. They must check for electrolyte imbalance, QT syndromes and congestive heart failure. The same checks have to be performed on those who also take concomitant medications, which are known to prolong a QT interval.

In relation to NVP, in particular, it is known that many women already have an electrolyte imbalance, particularly hypomagnesemia and hypokalemia. Motherisk is now offering counseling to all women who receive ondansetron for their morning sickness. Unfortunately, Motherisk has observed that the FDA warnings and precautions are still not being followed by physicians, and up to one million women each year continue to be prescribed the drug in this country.

The most important thing when treating women who are pregnant with any medication is the safety of both the baby and the mother. This is why it is vital that ondansetron should only be used if drugs that are classed as safe for using during pregnancy have been proven not to work. As stated, doxylamine-pyridoxine is currently the only FDA approved prescription drug for women with NVP in their first trimester. No research has been conducted as of yet into the possible effects of Zofran on unborn children after the first trimester, and some women do continue to have NVP at that point.

• OB/GYN News: Ondansetran, New and troubling data
• FDA Announcement
• Medline Plus on Ondansetron
• National Library of Medicine Resource on Study Conducted on the Use of Ondansetron During Pregnancy
• Society of Obstetricians and Gynaecologists of Canada Resource on Nausea and Vomiting During Pregnancy
• Another Study on the Link Between Birth Defects and Medications for Treating Nausea and Vomiting of Pregnancy
• Denmark Study on the Risk of Congenital Malformations with Ondansetron Use in Early Pregnancy
• GSK Pleads Guilty and Pays $3 Billion
• MotherRisk Program on Treating Pregnant Women While Protecting the Unborn 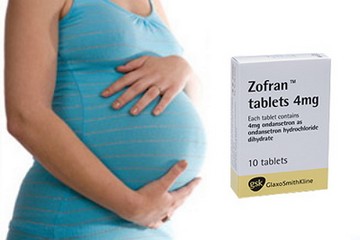