With these medical consequences of obesity in mind, it’s particularly troubling to note that in the United States, it is on the rise. According to the Centers for Disease Control (CDC), their most recent estimate is that 30.1% of adults are obese as of 2017. The obesity rate in the United States has doubled since 1990 when 15% of the population was classified as obese. More than one-quarter of adults aged 65 and older also have diabetes. Further, estimates for the costs of obesity range from $147 billion to nearly $210 billion per year. As consumers, we’re footing the bill. 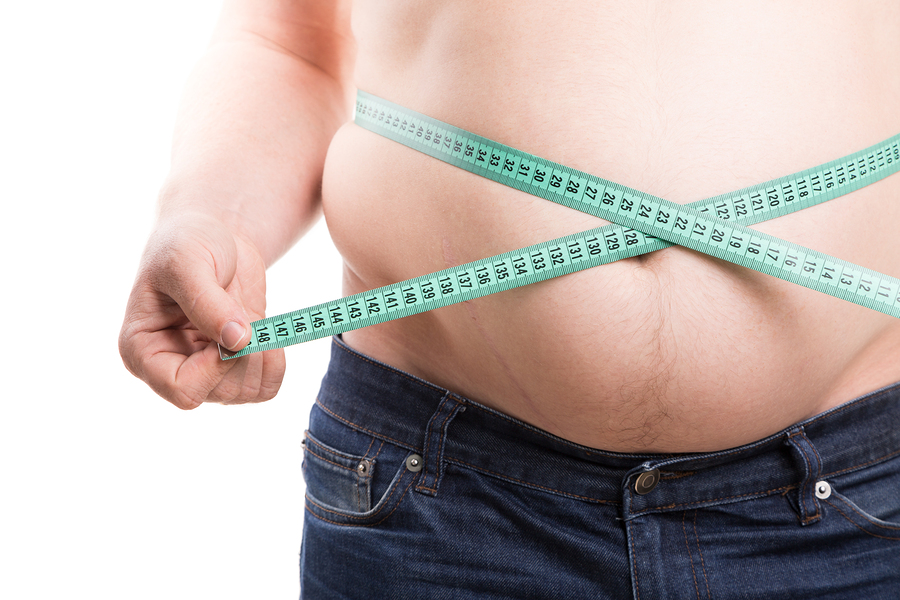 We thought we’d dig further into this obesity data in the United States and find out which states have the highest rates of obesity and which have the lowest? Where is it increasing the fastest and are there any states that are curbing the problem? And relatedly, which states have the best and worst eating habits and exercise regimes?

We found that West Virginia has the highest obesity rate in the nation while Colorado has the lowest rate. Many of the states with high obesity levels also rank poorly for exercise (Kentucky) and Unhealthy Eating (Mississippi).

The CDC defines obesity based on the Body Mass Indicator (BMI) scale and relates one’s height with weight. For adults, a BMI of over 30 qualifies as obese. Put more tangible, for someone who is 5 foot, 9 inches, and weighs 203 pounds or more qualifies as obese. The CDC publishes a number of obesity-related statistics for adults and adolescents segmented at the state level. This data was most recently updated in 2017, which is the data set we used in this analysis.

To start, let’s look at which states have the highest and lowest rates of obesity among adults. The following chart shows the percentage of the population in each state that is classified as obese, sorted from highest to lowest. 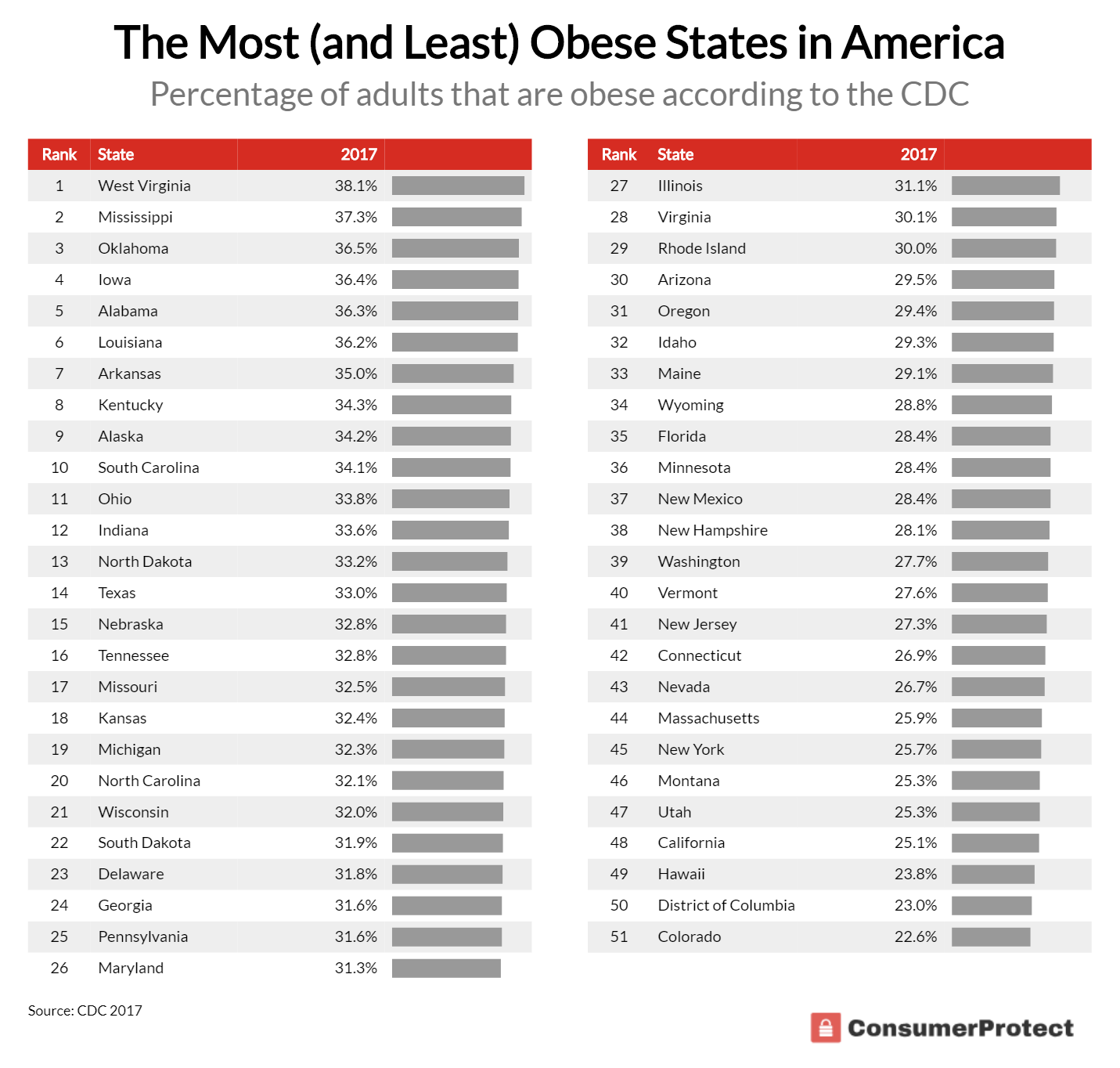 On the flip side of the coin, Colorado has the healthiest population in the United States, as measured by body mass index. Just 22.6% in Colorado qualify as obese, approximately 40% less than in West Virginia. The proximity to beautiful outdoors and better eating habits in Colorado result in the lowest BMI scores in the country among its citizens. In Hawaii, the state with the highest life span in the country, has the third lowest obesity rate in the country. On average, people in Hawaii live 6.5 years longer than those in Mississippi. It’s a wonder why healthcare expenses rise so vastly by age and region of the United States.

Now that we’ve established the most and least obese states in America, let’s examine the component parts that drive excess weight — the absence of exercise and healthy eating. The following chart shows the percentage of adults in each state that get zero physical activity during their leisure time outside of work: 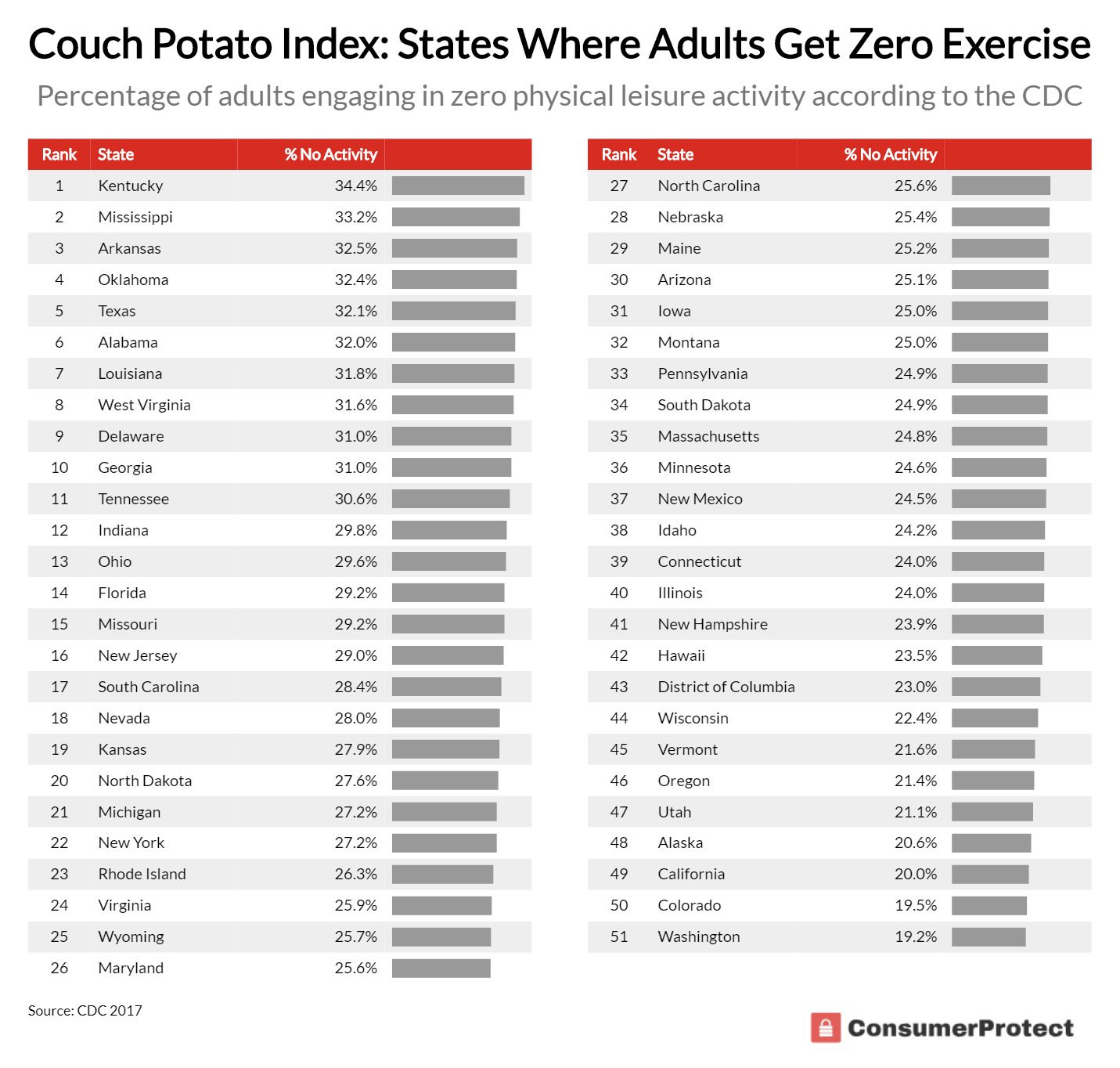 When it comes to lack of exercise, Kentucky leads the country in unhealthy habits. 34.4% of adults in Kentucky get zero exercise, which is near twice as much as in Washington where adults get the most exercise in the country.

While the order is slightly different, the list of the most obese states is virtually identical to the states where people are sedentary.  What’s more, of the top 10 most sedentary, 8 of them are located in the South.

When it comes to states where people get the most exercise, virtually all of them are places associated with outstanding natural beauty; Washington state leads the nation in exercise, followed by California, Colorado, Alaska, and Utah. Perhaps if you live near the mountains, you’re more likely to go hiking? Notably, however, Alaska rates well on the exercise index, but poorly on the overall obesity index. 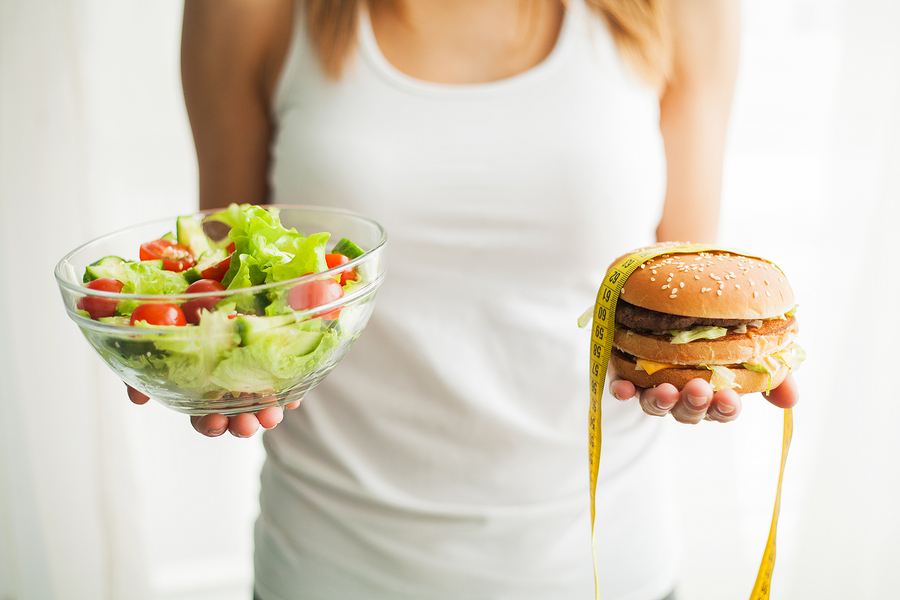 Lastly, let’s examine the other component of obesity — healthy eating. Among adults, the CDC tracks eating habits among adults and whether they eat fruits and vegetables. We were extremely interested in ranking states by vegetable consumption, but learned that the CDC classifies french fries and fried potatoes as a vegetable in its analysis! As a result, a state would appear to be very healthy simply if its residents ate french fries every day. 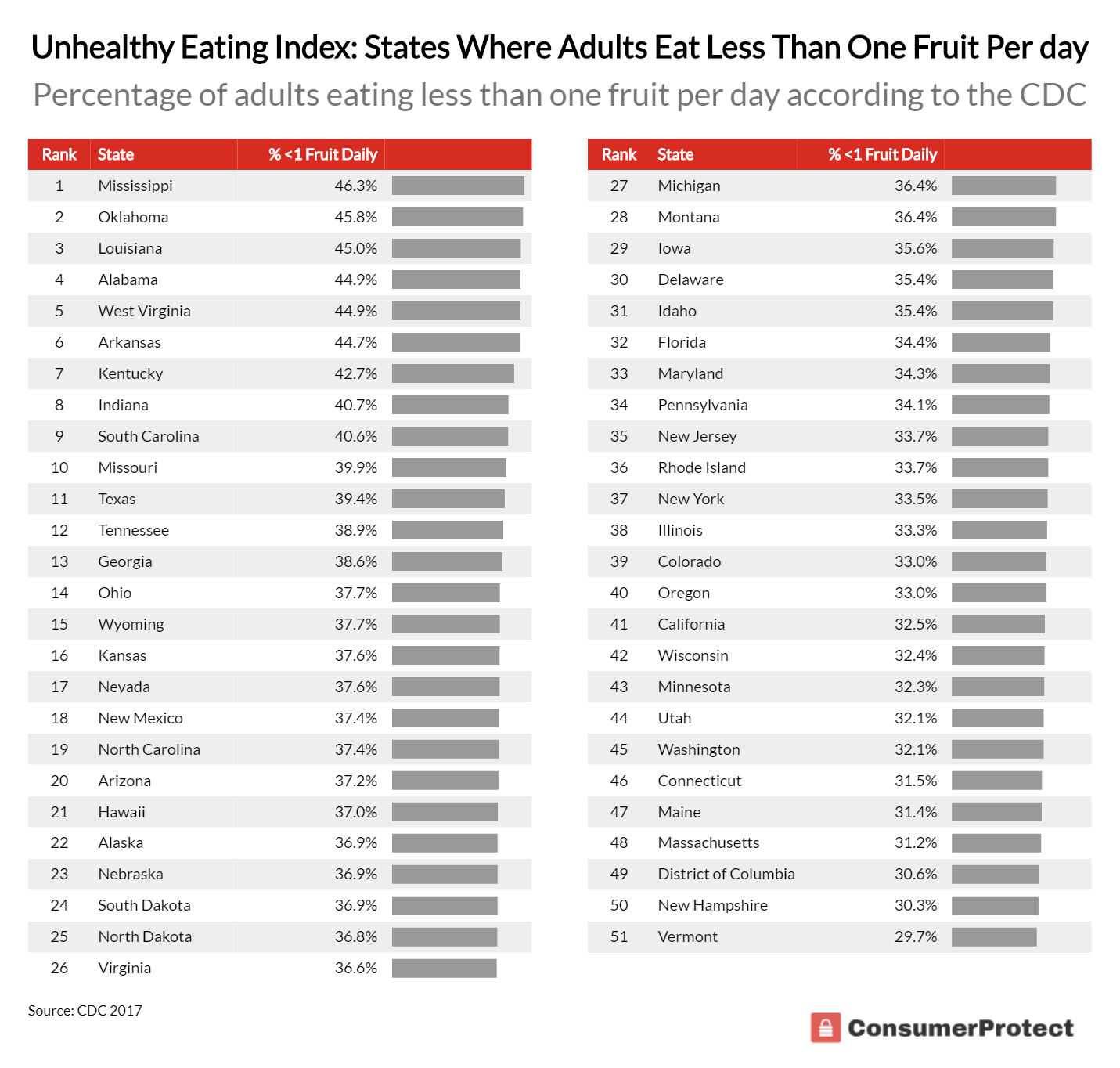 Not only does Mississippi have the lowest lifespan in the country, but it ranks #1 in unhealthy eating. Nearly all of the states with poor eating habits also top the ranks on the obesity index. Of the top 10 states with poor eating habits, 9 of them are in the South. When it comes to healthy eating, Vermont leads the nation. Given that the state also ranks well when it comes to exercise, it’s not surprising that Vermont has a relatively low obesity rate.

Obesity is a complex social and personal problem with a variety of causes attributable to social and personal habits. In this analysis, we looked at some of the data showing where obesity is the highest in the country. The state with the highest obesity rate is West Virginia, but obesity is on the rise across the nation. This has led some analysts to note that West Virginia is the “canary in the coal mine” for the health in general in the country. The levels of obesity seen in West Virginia and the South may soon be everywhere unless further action is done.

Information is power. Please share our content for editorial or discussion purposes. All we ask is that you link back to this page and give proper credit to our author.