A judge in St. Louis, Missouri in May 2017 upheld a $38 million verdict for a 12 year-old girl who was severely disabled by birth defects caused by a popular anti-seizure drug called Depakote.

The girl, Maddison Schmidt, was born in 2005 with serious birth defects after her mother was on Depakote when pregnant to prevent her from having epileptic seizures. However, the drug is associated with a much higher risk of spina bifida – as much as 2,060%.

The birth defects in addition to spina bifida include eye defects, microcephaly, brain defects, intellectual disabilities that can put victims in the bottom 1% of IQ, and nerve damage that may cause paralysis from the waist down and incontinence. Schmidt has had several spinal surgeries and shunts place in her skull to deal with her serious birth defects. Her medical care currently costs hundreds of thousands of dollars per year.

In 2015, a St. Louis, Missouri County Circuit Court jury awarded the girl $15 million in personal injury damages, and an additional $23 million in punitive damages against drug developer Abbott Laboratories for not warning the mother about serious risk of birth defects with Depakote.

Abbott appealed the large judgement and requested another trial. In November 2016, the Missouri Court of Appeals upheld the $38 million verdict. Now Abbott is facing hundreds more personal injury lawsuits over Depakote. As more of these lawsuits are successful, the financial cost to the company could be substantial.

Abbott sold more than $1 billion worth of the drug in 2002, which was the year the girl’s mother took it when she was pregnant. Her personal injury lawyers have accused the company of putting its profits ahead of the safety of the public.

During the jury trial, an Abbott Labs sales director stated that the drug was known inside the company as a ‘dirty drug.’ This was due to the fact that it had warning labels about spina bifida and birth defects since 1983. This made it a difficult drug to market.

According to attorneys, the goal of the drug company was to make as much money as it could from Depakote while it was still possible. It spent up to $100 million per year on drug marketing advertisements but virtually nothing on clinical studies looking at safety concerns.

The marketing efforts Abbott spent on included ones aimed at promoting ‘off label’ use as a chemical restraint for older patients with dementia. The company paid a $1.1 billion settlement with the Department of Justice in 2012. It also was marketed as a first line treatment for epilepsy, migraines and bipolar disorder.

Many of those patients were of the age to have children when they were taking Depakote, but most of them were not aware of the serious birth defect risks.

Today Depakote is known as a ‘Pregnancy Category X’ drug. This means that it only should be used as a last resort for women who are still able to have children. Decades of clinical studies have confirmed that it is one of the most dangerous drugs to the growing fetus.

Unfortunately, when the girl’s mother took the drug in Depakote in 2002, the label was not updated and had not been in more than 15 years. The warnings on the drug were not clear, lawyers argue, and they also accused the company of intentionally masking the serious risks of pregnant women taking the drug.

The outdated label stated that there was insufficient data to determine if the drug caused birth defects. In fact, lawyer stated during the trial that Abbott was aware of several studies that showed that the drug was a very dangerous anti-epileptic drug for patients of childbearing age.

The label stated that 1-2% of babies would likely develop spina bifida. This sounds low to the layman, but it really means that the drug enhances the risk of spina bifida by more than 2,000%. Today, Depakote has been confirmed to cause birth defects in 10% or more of babies who have been exposed to it.

A minimum of 800 personal injury lawsuits have been filed against Abbott Laboratories on behalf of children who have been afflicted with birth defects from Dekapote.

The above Depakote lawsuit is not the only one where Abbott was recently hit with a big judgement. In June 2017, another jury, this one in Illinois, awarded $15 million to cover the medical expenses for a boy who suffers from spina bifida and has had to have at least 12 surgeries after his mother took Depakote during pregnancy for bipolar disorder.

The mother, Christina Raquel, stated during the trial that she was not provided with adequate warnings about the high risks of birth defects.

As with the other mentioned above, when the child was conceived, the warning label for the drug only mentioned a 1-2% risk of having a baby with spina bifida. Even though many studies have clearly linked Depakote with serious birth defects, the label was not changed.

In this case, the company’s attorneys tried to argue that Abbott Labs had properly disclosed the spina bifida risk as well as other birth defects on the warning label. They argued that the woman was aware of the risks when she took the drug to deal with her mental illness.

However, prosecutors showed that Abbott knew in May 2004 that the birth defect risk with the drug was far above what was stated on the warning label.

If you took Depakote during your pregnancy and had a child who suffers from spina bifida or other birth defects, it is important for you to speak to an experienced personal injury attorney immediately to learn about your legal rights. You may be entitled to compensation, if it can be proven in court that your child’s birth defects were caused by Depakote. Please contact one of our personal injury attorneys today so that we can review your case at no cost to you. 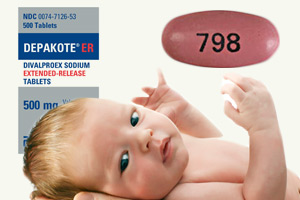