This question is still up for debate, but findings from a recent study show there was no more improvement in memory and reasoning (cognitive skills) in young adults who used commercial cognitive training offered by Lumosity over those who spent the same amount of time playing video games.

According to results from the study, which was published July 10 in the Journal of Neuroscience, there were no significant differences or improvements in brain activity and decision-making between the 64 participants who followed the Lumosity regimen for ten weeks and the 64 participants who played video games for the same amount of time.

Researchers also looked at a third group of young adults who had neither Lumosity training nor played video games over the duration of the study period and found that their level of improvement was the same as both controlled groups.

“Considering that even the people who had no training at all showed similar improvement in cognitive performance, that suggested to us that any benefits we observed on the measures were really do to the effects of practicing the assessments, and not due to the training itself,” said study author and vice dean for strategic initiatives with the University of Pennsylvania’s Perleman School of Medicine, Caryn Lerman.

What this means is that anyone who participates in brain-training exercises will likely show improvement in figuring out the types of puzzles presented in the programs because they are practicing a specific type of skill and exercising a specific part of the brain. But, according to study authors, this does not mean that these exercises actually help improve the overall function of the brain.

Lumosity is a 10-week program that includes a series of brain-training programs based on each person’s cognitive ability. Each newcomer takes three tests online to determine how he/she stacks up against others in his/her age group. This is called the “baseline.”

Once a baseline is determined, he or she will be provided “daily workouts” that are supposed to challenge five core cognitive abilities. As each person advances his/her skill level, the games will also advance so he/she will continue to be challenged.

The program is ten weeks long and involves about 30 minutes of training five days a week. At the end of the series the participant will be tested and will see how they have improved from the beginning.

Why People Think It Is a Scam

What people are saying and what this new study suggests is that brain-training does help with an individual’s problem-solving skills based on the specific type of testing he or she is doing every day. But, the argument is that this type of training doesn’t actually help improve decision-making and other cognitive functions like Lumosity has suggested and claimed.

Lumosity claimed that its games would improve memory, attention and problem solving skills and could help prevent age-related memory decline. Ads for the program claimed that by playing the simple brain-games for ten weeks a person would see improvements at work, school and in completing everyday tasks such as remembering where he/she put his/her keys or remembering the names of people he/she just met.

Lumosity ads on TV and online share convincing testimonials that claim the brain games actually work and have made huge differences in people’s lives by helping them problem solve and make decisions quicker.

The debate over whether or not the program is a complete scam is still up in the air and more testing will need to be conducted. But, for now, according to authors of this particular study, you could just play online video games for 30 minutes a day and still see an improvement in cognitive function. Or, not even.

Thousands of people have paid and undergone Lumosity brain game training because they believed they would come out at the end of training with a greater ability to problem solve and decision make. Based on claims made by Lumosity founders, people who have used the training expected to see vast improvement at work and school.

This isn’t the first time the question of whether Lumosity is a scam has come up. In fact, Lumos Labs, creator of Lumosity, was fined $2 million last year by the Federal Trade Commission for deceptive and unfounded claims that it could help people improve at work or school or delay early signs of dementia.

According to the FTC, playing the brain games may make a person better at those specific games, but it does not necessarily mean that he or she will experience improvements in the real world. According to the FTC, people were bribed with prizes to leave good reviews about Lumosity — that type of gathering and using testimonials is deceptive.

According to the FTC, founders of Lumosity used deceptive practices to gain testimonials that it used in its advertising. The FTC says that the group encouraged people to leave testimonials about the program by offering prizes. Examples of the testimonials include:

“…we learned that my mother had early onset Alzheimer’s. I joined Lumosity at first for my mother. I now use this site not only for her, but for my brain as well.”

Were You Scammed by Lumosity?

If you used Lumosity and believe that you were scammed by its convincing ads, you may be eligible for financial recourse. To learn more, you should speak with a qualified attorney.

The FTC is a group designed to “protect consumers by preventing anticompetitive, deceptive, and unfair business practices, enhancing consumer choice and public understanding of the competitive process, and accomplishing this without burdening legitimate business activity.” 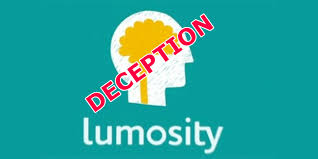