The battlefield can be a noisy place. From guns firing nearby to hand grenades exploding mere feet away to anti-tank weapons striking targets in the near distance, the auditory systems of individuals deployed to active military duty take a beating over the course of a deployment.

That’s why protecting the hearing of military personnel in active-duty warzones, as well as those working stateside, is so critical. With the second-most disability claims of any system of the body, thousands of service veterans have sustained significant, permanent hearing damage, and many of them have sustained this damage despite using what they believed was adequate protection.

The 3M Corp., makers of the Combat Arms Earplugs version 2 (CAEv2), is facing at least 100 lawsuits alleging the company knowingly sold earplugs to the U.S. military that the company knew were not effective enough at protecting troops’ hearing. The lawsuits also allege that the defense contractor did not provide adequate instructions for using the earplugs properly.

Just last year, 3M settled a whistleblower lawsuit surrounding the effectiveness of the CAEv2 earplugs, and now, at least 100 new lawsuits have been filed as of mid-February 2019, alleging ties between 3M’s earplugs and permanent hearing damage sustained by military veterans.

Combat Arms Earplugs version 2 (CAEv2) earplugs were sold by 3M and its predecessor, Aearo Technologies, to the Defense Logistics Agency and the Department of Defense. The “selective attenuation” earplugs were designed to be double-sided, a design that was meant to allow “lower-level sounds to pass with unlimited interruption” but restrict high-level sounds, meaning the wearer should be able to muffle very loud noises but still hear quieter sounds, such as speech, depending on how they wore the earplugs. This versatility would be very helpful on the battlefield, where loud noises are common but the ability to hear commands is crucial.

Aearo Technologies designed the earplugs more than 15 years ago; the company was bought in 2008 by 3M, which continued producing and selling the devices to the military. The whistleblower’s lawsuit, settled in 2018, alleged that Aearo knew of the defect as early as 2000, long before Aearo and 3M were made the sole military supplier of selective attenuation earplugs.

The lawsuit further alleged that Aearo and 3M doctored lab results to make the earplugs appear to meet all required standards. According to the suit, the stems of the earplugs were too short, which prevented them from being inserted fully into the ear. This poor fit caused them to loosen within the ear and allow harmful sounds to travel around the plug and damage sensitive structures within the ear, according to the lawsuit.

These earplugs were issued to thousands of military personnel serving in Afghanistan and Iraq between 2003 and 2015.

A hundred new lawsuits were filed in early 2019 in the U.S. District Court for the Western District of Texas — Waco Division, claiming that Minnesota-based 3M not only designed earplugs that failed to create a seal in the ear and prevent very loud sounds from reaching sensitive structures in the ear but that the company knew the devices were ineffective.

Failure of the devices caused hearing loss and tinnitus, in addition to loss of balance, among those who used them during their military service in Afghanistan and Iraq between 2003 and 2015, the 2019 lawsuits claim.

3M discontinued the earplugs in 2015 but did not issue a recall of the “selective attenuation” earplugs, of which 3M was the sole provider. In 2006, the government contracted with 3M for an annual supply of about 30,000 of the CAEv2 earplugs at a guaranteed price of around $9 million, according to one of the new lawsuits.

3M’s earplugs were sold to the military between 2003 and 2015. According to the RAND Corp., a leading research group, more than 2.7 million service members were deployed to Iraq and Afghanistan between 2001 and 2018.

In July 2018, the U.S. Department of Justice announced a settlement agreement had been reached that required 3M to pay $9.1 million surrounding allegations in a lawsuit that it knowingly sold defective earplugs to the U.S. military and withheld the truth about the devices.

Through whistleblower provisions of the False Claims Act, which allows individuals to sue on behalf of the government when they believe false claims are being made to secure government funds, Moldex-Metric alleged that 3M and its predecessor, Aearo Technologies, knew their earplugs were not long enough to allow proper insertion and that the devices did not perform properly for some individuals.

Moldex-Metric, a competitor of 3M, had alleged in previous lawsuits that 3M’s double-ended earplugs did not pass safety tests that were part of its contract with the U.S. military. Because the lawsuit was based on whistleblower provisions, the Defense Logistics Agency and Department of Defense were considered the victims, meaning the settlement amount will benefit the military itself, not the individual service members who lost their hearing.

As we age, it’s quite common to experience tinnitus, hearing loss, or both. About a third of individuals over 65 experience age-related hearing loss and tinnitus, but for younger people, exposure to loud noises can cause sudden and traumatic damage that may be permanent.

In the normal aging process, these changes happen gradually, but a short period of exposure to very loud noises can disrupt the hairs and nerve cells of the cochlea, a part of the inner ear that sends sound signals to the brain. When these structures sustain damage, an individual may experience tinnitus (ringing in the ear) and hearing loss, which may be permanent.

Some individuals experience only tinnitus, which may be mild or so severe that it disrupts daily live. Others, including those who also experience tinnitus, may suffer hearing loss that also can range from mild to severe. In addition to the range of possible physical harm, hearing damage can take an emotional toll as well, particularly for those who experience severe hearing loss, which can disrupt everyday life.

Physical and emotional symptoms of hearing loss and tinnitus include:

Hearing loss and tinnitus are some of the most common health problems suffered by military personnel, according to the U.S. Department of Veterans Affairs. In its report for fiscal year 2017, the VA’s Veterans Benefits Administration determined the auditory system was the body system second most likely to be affected by a disability among VA benefit claimants. The only bodily system more affected was the musculoskeletal system. Additionally, more veterans claim disability compensation for hearing loss than for mental health problems.

Why do so many military veterans sustain hearing damage? Quite simply because their daily lives involve being nearby when rifles, pistols, hand grenades, and anti-tank weapons are fired, and these events often take place in close quarters, such as buildings and even inside tanks.

While the regulations concerning workplace health and safety as managed by the Occupational Safety and Health Administration (OSHA) do not apply to uniformed military personnel, the agency’s determination of how much noise is too much noise is instructive when considering how much risk service members are under from hearing loss.

* While sound is normally measured in decibels (dB), OSHA’s regulations use dBA, which is a weighted measurement that accounts for variations in sensitivity of the ear between individuals

Research published by the Centers for Disease Control and Prevention and the National Institute for Occupational Safety and Health estimated the potential noise exposure military personnel are under by examining the noise produced at a gun range, measuring noise produced by different types of weapons.

** Indicates LAeq, a measure of the equivalent sound level in decibels over a continuous period

Though the company chose to settle the whistleblower lawsuit, it did not admit fault or acknowledge as true any of the accusations made in the lawsuit.

The company said in a news release that, “Settling the investigation into this discontinued product at this point allows the matter to no longer be a distraction to the business, and frees former and current 3M employees from having to go through the inconvenience of a protracted investigation and litigation. We take great pride in our products and this resolution is not an admission of liability, but simply a decision to move forward with our mission to provide high quality personal safety equipment products to our customers.”

As recently as 2017, 3M was providing military personnel with new auditory devices, according to a company news release, which announced 3M had agreed to a contract with the U.S. Army to provide more than 6,500 earplug kits and headsets. These devices, named PELTOR TEP-100 Tactical Earplug KIts and PELTOR COMTAC III ACH Communications headsets, will be provided to the military in a contract work more than $1.6 million.

Are You a Veteran Who Sustained Hearing Loss Due to Faulty Earplugs?

U.S. military veterans who served between 2003 and 2015 and suffered hearing damage despite using 3M’s CAEv2 earplugs should know their rights. As we know, hearing loss is far from a minor annoyance and can impact physical and emotional health in devastating ways.

Individuals who used these earplugs as part of their military service and sustained permanent hearing loss that resulted in major emotional or physical damage could be entitled to financial compensation to cover medical bills, treatment costs, other damage.

It’s important to note that the case 3M settled in 2018 does not directly benefit military personnel and veterans, as the settlement money went to the military itself, which was the alleged victim in the suit. Veterans whose hearing was permanently lost because of 3M’s earplugs must file individual lawsuits in order to claim damages against 3M.

If you believe you are entitled to compensation for permanent hearing loss you sustained while using 3M’s earplugs in your military service, contact us today. 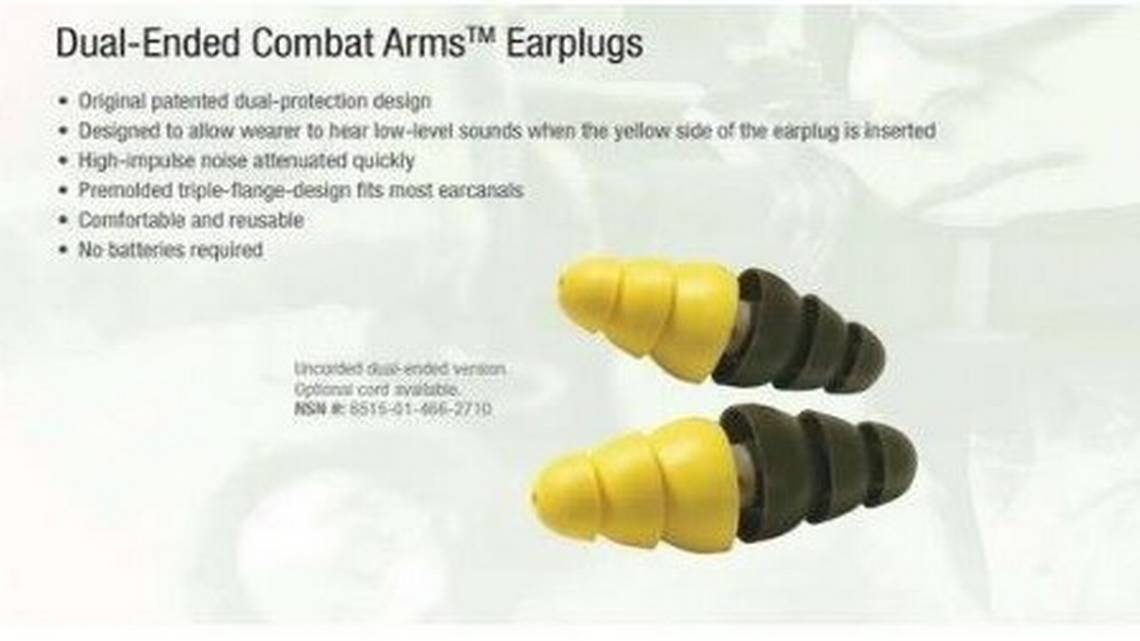