IVC Filters, or inferior vena cava filters, were originally intended to help save lives by reducing blood clots that lead to the lungs. The small devices were supposed to be temporary solutions for certain patients that were not eligible for other treatment methods.

They are very small cage-like medical devices which are inserted into the main vein that travels from the lower portion of the legs to the heart. It is this very important vein that has the potential to carry blood clots that can travel from the lower legs to the legs, potentially causing a life threatening pulmonary embolism, or PE.

Patients who need to reduce their risk of developing a PE and who cannot take anticoagulant medications are sometimes implanted with IVC filters. These filters are supposed to capture the blood clot before it has a chance to reach the lungs.

Unfortunately, while they were successful in some cases, there were even more patients that had difficulty getting them removed and had some severe, life-threatening risks and side effects. The FDA eventually recalled the devices, and multiple lawsuits were filed against Bard, the manufacturer of the device.

During the process and time period of the lawsuits, information about the failures of the devices, possible tampering of signatures during the FDA application, and Bard knowing about the risks, have come to light.

There are multiple risks of the IVC filters, even though they  are meant to help save lives. There was a 2013  study published by the American Medical Association that showed not only more than 900 adverse side effects, but many patients who were unable to get devices removed.  Since many of the risks of the devices have to do with keeping them in longer than anticipated, it led to the eventual recall and lawsuit.

While they were meant to last only 52 days, 11 patients had their devices in for more than 85 days because their doctor was unable to remove them. This included 8 patients with embedded devices, 3 patients with the filter going through a major blood vessel, 2 patients where the devices migrated to a position that made them difficult to remove, and a patient who had a blood clot inside the filter.

Side Effects of IVC Filters

Aside from the general risks of IVC filters, even more patients have reported adverse and often severe side effects. They are meant to avoid life-threatening conditions from having blood clots in the lungs, but they also were found to cause even more problems with certain patients. The FDA report tied to the recall and lawsuit of the Bard IVC Filter devices included side effects like:

Patients experiencing the most severe side effects from the devices had them in much longer than the original recommendation. Part of this was because of how dangerous and/or difficult they were to remove.

When a study was conducted by Dr. William Nicholson from York Hospital in Pennsylvania that was published in the Archives of Internal Medicine, the FDA sent out their first warning about the devices.

The warning was not only due to the devices being fractured while still inserted in patients, but because many of the problems were due to the length of time they were in. Some doctors were leaving them in far longer than they were originally intended, which increased many of the risks that hundreds of patients were experiencing. Some of these problems were even life-threatening.

The reason this report was originally published was because when the FDA originally approved of the IVC filter devices, they labeled them as being low-risk and gave clearance without proper clinical safety data.

The recall came shortly after discovering that as in approximately six years there were over 920 reports of adverse effects and serious risks due to the IVC filter devices, including 70 perforations, 56 IVC filter breaks, and 328 migration of the devices.

This recall is for any IVC filter devices that were produced before 2004 within a certain product code (M001505010). This was because these specific devices were manufactured with detachments of the bond between the outer casing of the device and the carrier capsule, which resulted in embolization and even life-threatening conditions, like cardiac arrest. The original recall was not for devices patients already had implanted. This included about 18,000 devices in total.

In addition to the fact that the FDA recalled the Bard IVC, they may have had more issues with the organization early-on. It was revealed that Bard might have already been aware of the risks and negative side effects of the device even before reports surfaced of these risks.

Furthermore, the new evidence shows that it is possible they forged signature on the original FDA application in order to get the device approved. In the early days, Bard applied for the device with the FDA in 2002, which was originally denied. It didn’t get clearance until Kay Fuller, a regulatory specialist, got involved. Fuller herself was sceptical about the device due to data from some of the earlier clinical trials and did not support clearance. It is her and other signatures Bard is believed to have forged.

In 2010, several years after the FDA approved of the IVC Filters, and shortly after they were recalled, lawsuits began to crop up in regards to the device. The FDA discovered that while the filter devices were in fact reducing the risk of blood clots in many of the patients, they were causing many other issues from embolization to fractures and perforation of the vena cava.

It wasn’t until four years later that C.R. Bard claimed the issues were because the device was supposed to be used for temporary use and removed in 54 days or less. Unfortunately, even retrieval of the devices proved to be an issue. Reports show that only about 10 percent of patients had the devices removed effectively.

This led to dozens of lawsuits by patients who had claimed the damages and serious injuries done to them from the IVC filter device. The case ended up at the U.S. District Court on August 17th 2014, issued by the U.S. Judicial Panel on Multidistrict Litigation. The lawsuit should hopefully entitle some patients to compensation, particularly the patients who experienced serious injuries as a result of the device. 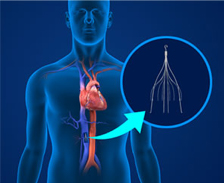