Over the last several years, cities across California and America have experienced a major increase in the use of shared electric scooters. They are seen on curbs, sidewalks and front yards, from Los Angeles to San Francisco and across the US.

The e-scooter phenomenon has built several billion dollars startups, a new subculture in urban areas and also a sort of ‘gray market’ for freelance scooter chargers. But as with any new product, it also is triggering lawsuits. In the case of a mode of transportation that has riders highly vulnerable to serious injury, it can be expected there will be many more personal injury lawsuits involving e-scooters in the future. (Latimes.com)

Now, personal injury attorneys have their first look at data as they are working to obtain compensation for injured e-scooter riders and pedestrians. A small study reviewed e-scooter injuries of 250 patients in two emergency rooms in Los Angeles – Ronald Reagan UCLA Medical Center in Westwood and UCLA Medical Center in Santa Monica, from September 2017 through August 2018. This report showed the types of minor and more serious injuries that victims are suffering on e-scooters.

Most of the injured that were studied were riders, not pedestrians. The injured riders were 34 years old on average, and 58% of them were men. The study showed in some cases the injuries were related to riders not adhering to traffic laws or warnings by the scooter companies themselves.

Approximately 40% of the patients suffered head injuries, and 32% had broken bones. The study also showed many of the injuries happened in patients who were under 18. The research did not look at the chances of being killed on a scooter compared to a car, but rather the injuries that resulted on the scooters. The study did show that most of the injuries occurred when the riders simply fell off – 80%. And 11% hit something and were injured.

The major uptick in scooter injuries has prompted many lawsuits. One of the most notable is a proposed class action lawsuit in California state court against Bird, Lime and several other scooter companies, alleging gross negligence. (Latimes.com) This complaint was filed in October 2018 on behalf on people that were hurt by scooter users, not on behalf of riders. Plaintiffs in the case allege the scooter firms knew or should have known that their products would be unsafe, dangerous and a public nuisance.

The class action lawsuit against the scooter companies was filed on behalf of eight plaintiffs. It states by ‘dumping’ their e-scooters on public streets without providing appropriate warnings, the companies are acting negligently. Three of the plaintiffs claim they were walking when a rider crashed into them from the rear, causing severe injuries. The suit also alleges the companies were aware their riders were hurting pedestrians and by not stopping the collisions from happening, they were assisting and encouraging scooter riders to ‘commit assaults.’

In addition, the class action lawsuit alleges Bird and Lime scooters have defective electronics and mechanical parts, and poor safety instructions for riders. Further, the suit alleges the risks that the devices posed were known or knowable according to professional knowledge in the transportation community.

The class action lawsuit also names Xiaomi US and Segway as defendants. It notes that hundreds of riders and pedestrians have suffered and are continuing to suffer serious and avoidable injuries from e-scooters.

For its part, Bird has responded to the class action lawsuit, noting that the complaint is essentially being brought against the entire industry. It added that e-scooters are a vital mode of transportation for hundreds of thousands of people in cities across the world. The e-scooter company also added that the climate crisis and society’s dependence on cars demands a mode of transportation that is zero emission. E-scooters play a vital role and are replacing millions of short car trips every year. Bird argues further there is ‘no evidence’ that riding an e-scooter is more dangerous to riders and pedestrians than riding a bike.

One of the issues with many of the lawsuits that have been filed against e-scooter companies is that to ride most of the devices, the rider must sign a document waiving liability. This presents a higher bar for a personal injury lawsuit, but it does not necessarily mean that a lawsuit cannot be successful.

According to one attorney in Beverly Hills, some lawsuits against e-scooter companies have been successful but it is much more challenging when liability is waived. It should be noted that riders rarely even read the e-scooter user agreement they must sign. She said many of the injuries involve serious head injuries, broken bones, dislocated joints and involve a high level of medical expenses. Many of these riders need to receive compensation for their injuries, and to be successful, the personal injury attorney needs to be extremely experienced and skilled due to the liability waiver usually in place.

While personal injury lawsuits with e-scooters can be challenging, product liability lawsuits are another matter. There have been cases in California where the e-scooter did not operate as intended, resulting in rider injury. For example, a rider in Los Angeles was riding a scooter when its brakes failed. He ran into a car and broke his wrist.

This presents a clear case for a product liability lawsuit in California. California law has means for seeking accountability for any injuries caused by a defective product. If the scooter left the factory with a safety defect such as poor brakes, then the manufacturer could be held liable in a lawsuit. The scooter manufacturer may also be held liable for not conducting a reasonable inspection to make sure the scooter was safe and fit for use. (Sfexaminer.com) 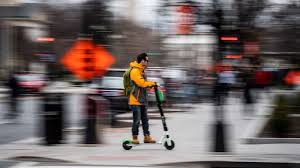