Posted on August 19, 2019 by ConsumerProtect.com

Have you or a loved one been diagnosed with ovarian cancer due to using Johnson & Johnson Shower to Shower Powder? You could be entitled to financial damages from J&J for exposing you to harmful asbestos particles that may have been present in some J&J talcum powder products. This article details what you need to know about filing a Shower to Shower Powder lawsuit, as well as recent settlements.

Some scientific studies have shown that Shower to Shower Powder may have been contaminated in some cases with traces of asbestos. It is known from years of mesothelioma lawsuits that long term exposure to asbestos is dangerous and exposure can cause many types of cancer.

But asbestos-related diseases can take years to develop. Some patients may not develop ovarian cancer for many years after the exposure to the human carcinogen. Plus, it can take years of asbestos exposure in the Shower to Shower Powder made by J&J for some women to develop cancer.

Because of the possible talcum powder ovarian cancer risk, Johnson & Johnson has faced many personal injury lawsuits and product liability lawsuits in recent years. The company is accused to selling tainted Baby Powder and Shower to Shower Powder to women who used to products on their genital regions. It is believed that in some cases the exposure to the genital area caused powder to get into the ovaries, and the asbestos present may have led to cancer.

However, documents unsealed in recent that were unsealed in a talcum powder ovarian cancer lawsuit in 2017 showed that company executives were aware of asbestos in Shower to Shower Powder and Baby Powder many years ago.

Company reports uncovered at trial showed executives wanted to suppress fears over asbestos contamination in talc mines in Europe and Vermont. Some J&J staff wanted to switch the major ingredient in talcum powder products to corn starch and stop using talcum powder at all. But the company never ceased the use of talcum powder, and now consumers and juries are holding J&J accountable for causing ovarian cancer in some women.

Should You File a Shower to Shower Powder Lawsuit?

Deciding to file a personal injury lawsuit against J&J is something to weigh carefully. If you have been diagnosed with ovarian cancer, you probably have a lot of medical expenses, lost wages, and you may have difficulty supporting your family financially. You and your attorney may decide to file a lawsuit, but it could end up in settlement before it goes to trial.

But sometimes Johnson & Johnson decides to fight the lawsuit and will not settle. If you are a woman with ovarian cancer caused by talcum powder and asbestos exposure, you may have little choice but to file suit. Many people with this cancer cannot work and have suffered a lot of physical and psychological pain.

If you file a talcum powder lawsuit against J&J for causing your cancer, you first need to have a diagnosis from a medical professional that you have ovarian cancer. This normally is accomplished by a physician, who will order a pathology report and biopsy. If you were previously diagnosed, your doctor possesses this information. You can talk to your attorney about additional evidence to prove you were exposed to asbestos in Shower to Shower Powder.

If you and your attorney decide to file suit, it is possible that you could obtain significant compensation in a Shower to Shower Powder lawsuit. Below are some of the recent settlements and verdicts for J&J talcum powder products:

Eligibility for a Shower to Shower Powder Lawsuit

If you or someone you love has ovarian cancer or mesothelioma and used Shower to Shower Powder, you may deserve compensation for your medical bills, pain and suffering, lost earnings, loss of companionship, and/or funeral expenses (if you lost your loved one to the disease.). Speak to a licensed attorney in your area to determine if it would be beneficial to file suit against Johnson & Johnson.

Recent $325M Verdict in Talcum Powder Case - File Your Lawsuit Claim Now!
All fields required. There is NO OBLIGATION in completing this form. 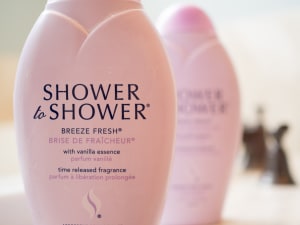