Posted on January 9, 2017 by Michael Bennett

In October 2016, St. Jude Medical told both patients and doctors that a small number of its 350,000 defibrillators that were implanted in the US could have the a battery problem that makes the devices cease to function without warning.

The devices are supposed to issue a ‘warning’ vibration of low battery at least three months before the battery fails. In some cases, the defibrillators issue a warning vibration just 24 hours or less before battery failure.

This problem could present serious medical complications for some patients who had a St. Jude defibrillator implanted, including serious injury and possibly death. So far, two patients have died due to a malfunctioning defibrillator, which has spurred wrongful death lawsuits. Other lawsuits are pending, having to do with the company allegedly failing to warn patients about problems with its Riata defibrillator leads.

The devices, which are officially known as implantable cardioverter defibrillators, and cardiac resynchronization therapy defibrillators, are affected by potential, premature battery depletion. The affected devices were made before May 2015.

The alarming news sent the stock for the company plummeting by 4%. The news also sent shares of Medtronic falling as well. Medtronic is another major medical device maker that is located in Minnesota, as is St. Jude.

St. Jude has altered the battery lay out of the device to eliminate the problem. But the devices were still marketed and sold until October 2016.

So far, only 841 of the 398,000 or so defibrillators sold worldwide by St. Jude have been shown to have the potential battery problem. This includes 549 in the US; 46 of the devices had visible electric shorting coming from the battery clusters.

How the Devices Work

The company’s implantable defibrillators shock the heart into a steady rhythm if it stops having a regular beat. They are implanted under the skin in the upper chest. The devices have wires known as leads that are attached to the heart and regulate how the muscle beats. Defibrillators can help people with either bradycardia – slow heart beat – and those with tachycardia – fast heartbeat.

Shocking the heart into a regular rhythm regularly requires the product to have a strong battery. Experts say that the devices would most likely fail after three or four years of use.

The problem was known since 2014; St. Jude worked with Duke University researchers who discovered what they called lithium cluster formation. The failure rate for the defibrillators in that study was .6 percent.

According to the company’s medical director, Dr. Avi Fisher, the company’s analysis of the problem found that while there was a problem with lithium cluster failures in the devices, the rate of failure was very low.

The defibrillators also can work as pacemakers for some patients, and that function is affected by the problem.

About the St. Jude Recall

The seriousness of the problem with St. Jude defibrillators made the FDA issue a Class I recall in late 2016. A Class 1 recall is a very serious situation, and it must be issued by FDA when a medical device has had a defect that causes serious death or injury.

In a Class I recall, the agency requests that the company gives out as much information about the product as possible. This includes the name of the medical device; the number of products that have been released; the reason the device has been removed from the market; how the company proposes to handle the recall; and all distribution information for the products.

At the time, St. Jude Medical said that it had told doctors that they should monitor patients who were implanted with the 445 Optisure leads, which are a type of the defibrillators.

Further, St. Jude told all doctors who are using the device with patients to make sure that their clients have been enrolled in the Merlin.net patient monitoring system. They also advised them to use the DynamicTx technology; this will automatically adjust the level of the shock to ensure that the high voltage therapy works effectively.

Some medical device experts argue that the defibrillation leads that are used by other manufacturers also could have been defective in past years. They noted that those companies had approximately the same number of adverse events as St. Jude reported. Those experts also noted that St. Jude is aggressive about reporting adverse events. They further stated that St. Jude field staff could be reporting any suspected AE, which could artificially increase the total number of AEs.

The recall by FDA of these defibrillators was important because the devices are used all over the globe to help millions of heart patients.

FDA stated after the recall that patients who have St. Jude defibrillators should see their doctor right away if they feel dizzy or lightheaded. They also should be taken to the ER immediately if they lose consciousness or have chest pains or shortness of breath.

If you think that you may have been injured by a St. Jude Medical defibrillator, you should talk to an experienced defibrillator recall lawyer. Whether the problem occurred before or after the Abbott Labs acquisition of the company, you could have a legal case for financial compensation.

A lawsuit could be appropriate if you or a loved one have suffered injury or death due to the possible malfunction of a St. Jude defibrillator whose battery gave out without warning.

Have You Been Injured? You May Be Entitled to Compensation

File Your FREE Claim Now. Substantial Compensation May Be Available.
All fields required. There is NO OBLIGATION in completing this form. 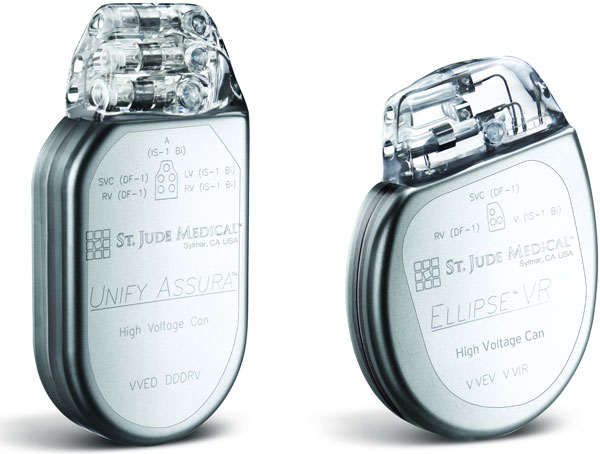