Any woman who is considering pregnancy or is already pregnant should immediately talk to her physician about any medication she is taking or planning on taking. This is true not just for prescription drugs but also with over-the-counter medication. In fact, even herbal and dietary products should be consulted about.

It is believed that each year, some 5 million pregnancies happen in this country. The average woman also takes between three and five different medications. This is why it is so important to be aware of whether or not a drug, prescription or not, natural or chemical, is safe for both mother and baby.

The U.S. Food and Drug Administration (FDA) has outlined different categories of drugs to explain their safety. A is the least harmful, and X is the most harmful. The categories are A, B, C, D and X, with an extra ‘N’ category for drugs about which no information is yet available. The letter assigned to the drug effectively indicates whether or not there is a risk of the unborn baby developing birth defects if the drug is used while the mother is pregnant. The FDA spends a lot of time reviewing existing documentation and determining how reliable it is, before coming up with a risk to benefit ratio that ultimately determines the category the drug will be placed in. However, these categories do not look at specific risks caused by pharmaceutical agents. They also do not look at how the drugs metabolize in breast milk. For pregnancy, the categories are as follows:

This means that there are well-controlled and adequate studies available that were not able to show that a risk to the fetus exists if the drug is taken in the first trimester, or at any other point. Examples of drugs in this category are folic acid, levothyrozine, liothyronine, and magnesium sulfate.

In a category B drug, studies on animals did not demonstrate that there was a risk to the fetus. However, as there are no well-controlled and adequate studies available on women, the drug can not be classed as a category A. Examples of drugs in this category are hydrochlorothiazide, metformin, amoxicillin, cyclobenzaprine, and pantoprazole.

In a category C drug, there have been animal studies in which it was demonstrated that the fetus experienced ill-effects due to the mother taking a certain drug during the first trimester or beyond. However, no well-controlled and adequate studies on humans exist. The drug has certain benefits, which is why it may still be prescribed, despite the potential risks. Examples of drugs in this category aree gabapentin, tramadaol, trazodone, amlodipine, and prednisone.

In category D drugs, there is evidence that there is a human fetal risk because marketing or investigational experiences and/or studies in humans have shown adverse reactions in the fetus. However, the drug has some benefits, and these may at times be so significant that it may still be better for a woman to take the drug, despite the risks. Examples of drugs in this category are alprazolam, lisinopril, clonazepam, losartan, and lorazepam.

Category X drugs are the most dangerous of all. These are drugs whereby animal or human studies have shown that fetal abnormalities and/or a risk of human fetal abnormalities definitely exist. This is supported by investigative data, including marketing experience. Additionally, in a category X drug, the risk to an unborn baby outweighs any benefits the pregnant mother may get from the drug. Examples of drugs in this category are simvastatin, atorvastatin, methotrexate, warfarin, and finasteride.

Category N drugs are unclassified drugs. The recommendation, therefore, is to not take them unless the physicians prescribing them can explain exactly why they feel the drug is important. Examples of category N drugs are hydroxyzine, oxycodone, diazepam, and acetaminophen.

Effects of Medications During Pregnancy

Unfortunately, very little is known about the effects taking medications have on pregnancy and development. This is, in part, due to the fact that pregnant women are rarely included in studies designed to find out whether new medications are safe before they are released to the market. In fact, less than 10% of the FDA approved drugs since 1980 have sufficient available information to determine whether or not they could cause birth defects.

Whenever a medication is released to the market, studies are conducted. Thanks to this, we do know that there are medications that can cause birth defects, although it is not always known how. Some examples include isotretinoin (brand name Accutane) and thalidomide (brand name Thalamid). Any woman who is, or is thinking about getting, pregnant should avoid these medications. In fact, any woman who is prescribed this type of medication should find out about effective methods of contraception as well. There are quite a number of drugs that are known to cause damage if they are taken during pregnancy, but the reality is that this information is not known for the vast majority of drugs. What is known is that there are a number of factors that will determine how much risk a woman is exposed to. These factors are:

It is very important to always speak to a doctor if you are pregnant or plan on getting pregnant about any medications you are taking or could be taking. When speaking to a physician, you must always mention all medications, which includes prescription, over-the-counter, and dietary and herbal supplements. You must make sure that, during pregnancy, you only take medication that is absolutely necessary.

Teratogens are agents that are known to cause birth defects. Various substances and environmental agents can be classed as a teratogen. These include street drugs, prescription medication, diseases, alcohol, chemicals and more. It is believed that between 4% and 5% of birth defects are caused directly by exposure to a type of teratogen. (See teratogens lawsuits & settlements).

Teratogens and the Phases of Pregnancy

After conception, which is when the egg is fertilized, it takes between six and nine days for the egg to anchor into the uterus (or implant). Once this is complete, a common blood supply between the embryo and the mother exists. This means that anything that is in the mother’s blood will cross over into the fetus. Teratogens can generally affect fetuses for between 10 and 14 days after conception.

When a fetus is developing, different organs develop at different times. Teratogens can, for instance, interfere with neural tube closure. However, this is only risky if the exposure happens between 3.5 and 4.5 weeks of pregnancy. After that time, all neural tubes are closed. However, other systems and organs have the potential to be sensitive even afterwards. The central nervous system is a prime example of this, which means the baby’s brain and spine. A very common teratogen that can have effects throughout pregnancy is alcohol. No matter at which point during the pregnancy it is consumed, it can cause birth defects as well as significant and long-lasting health problems in the baby. This is because the central nervous system is particularly sensitive to alcohol throughout the nine months of pregnancy. It is for this reason that women should not consume any alcohol when they are pregnant.

Many different teratogens exist and have been documented to cause birth defects. The three main ones are:

What Are Safe Medications During Pregnancy?

There are many websites that post extensive lists of medications, claiming them to be safe during pregnancy. It is important to be wary of these because the reality is that most of the medications on those lists have not actually been tested sufficiently to know whether or not they are actually safe during pregnancy. Additionally, you should never make any decisions in terms of what you should and shouldn’t take during pregnancy by information that you find on the internet. Rather, you should use lists that you find as a starting point and cross reference them with the FDA website. After that, you must speak to your healthcare provider about any medication you are taking or consider taking.

Is It Ever OK to Take Medication During Pregnancy?

The reality is that pregnant women may have certain health conditions for which they must take medication. For instance, an epileptic woman, a woman with asthma, a woman with depression or a woman with high blood pressure, will need certain medications to make sure she can have a healthy pregnancy. Without treating these conditions, there is a chance of harm occurring to both the pregnant woman and the baby. It is very important, therefore, that a woman is aware of her options and what the pros and cons are of taking medication, both for herself and her unborn child. It is about finding a balance between the risks and benefits and coming to an informed decision. Either way, a pregnant woman must also remain under extensive care of a physician.

Once again, it is important to know that these cautionionary measures must be taken not just with chemical drugs. Herbal supplements and dietary products, including herbs and vitamins, can also be harmful to an unborn child. It is vital to discuss this with a healthcare provider, therefore.

There is the possibility that women take medication while unaware that they are pregnant. In this case, they may be very concerned about the effects these medications may have had on their unborn baby. It is indeed vital that a woman discuss this with a healthcare provider. Unfortunately, there is a chance the drug did cause some harm, although any pregnant woman should keep in mind that the vast majority of medications are unlikely to lead to significant problems.

There are a number of common birth defects, most of which can be caused by teratogens. They include:

There are a number of drugs that are known to cause birth defects. These include:

Importance of When the Drug Was Taken

Drugs interact differently depending on when they are taken. This is why it is again vital to discuss any plans to get pregnant with a physician and why you must have proper prenatal care as soon as you get pregnant. As such:

There are a number of resources that have been provided by the FDA to help women know what the potential risks of certain medications are. As stated before, however, it is vital that you don’t make decisions in terms of your health based solely on these online resources. Always consult with your physician first. 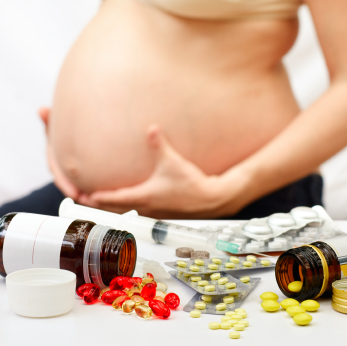