Do you take Nexium or Prilosec? Have you suffered a serious side effect from long term use of these drugs, such as kidney disease, kidney failure, cancer, heart attack, bone fracture, vascular aging or birth defects? You may be entitled to financial damages from the pharmaceutical manufacturer for causing your injuries.

This article describes Prilosec lawsuits and Nexium lawsuit payouts and settlements, as well as what you need to know about filing a PPI lawsuit. If you want more information about Prilosec vs Nexium health problems and lawsuits, please contact one of our attorneys for more information.

What Are Prilosec and Nexium?

Prilosec and Nexium are proton-pump inhibitors (PPIs) that are used to treat common stomach acid problems, such as GERD, acid reflux disease, indigestion, dyspepsia and peptic ulcers. PPIs work by blocking the proton pump in the gastric parietal cells, which is the last step before your stomach makes acid.

As of 2018, FDA had approved six PPIs to treat gastrointestinal problems, including Prilosec (omeprazole) and Nexium (esomeprazole). PPIs generally are commonly prescribed by doctors, with more than $14 billion in yearly sales. The drugs are promoted in an aggressive fashion as both safe and effective. Marketing suggests that users face little risk of side effects from Prilosec and Nexium. But some clinical studies have shown that long term users of the drugs could face risks, including kidney injury, kidney disease and kidney failure.

Thousands of users of both drugs have filed personal injury lawsuits and product liability lawsuits seeking compensation for their major health problems. If you have been injured by taking either drug, you could benefit from filing a claim yourself.

In December 2014, FDA ordered PPI manufacturers to add new acid reflux drug warnings for Nexium, Prilosec and other PPIs. The new warning stated that some users have been diagnosed with acute interstitial nephritis. This is an inflammation of the kidneys that can lead to chronic, long term kidney damage. But evidence suggests drug manufacturers were aware or should have been aware of the possible kidney disease and failure risks with these drugs, and they failed to offer consumers proper warnings and information.

A study released in July 2017 found that using PPIs for years can lead to a 25% increased chance of death, when compared to several other heartburn drugs known as H2 receptor antagonists. (BMJ.com). The latter types of drugs belong to an older class of heartburn drugs that include Pepcid AC, Zantac and Tagamet. These drugs are not connected to a substantial risk of kidney failure and injury.

The clinical study compared Department of Veteran Affairs (VA) data on millions of patients to 350,000 new PPI or H2 receptor antagonist users. There was a median follow up of 5.7 years. The study compared the risks of death by looking at those who used one type of heartburn drug with the other type. The study also compared death rates of people who used PPis or H2 blockers to people who did not use any heartburn drugs.

Study researchers stated that study results showed a higher risk of death among users of PPIs. The risk also rose among people who did not have stomach problems, and with longer use. They said that reducing PPI use and the length of use could be warranted as it could reduce the risk of serious kidney side effects.

Another study published in the medical journal CMAG in April 2015 stated that users of Prilosec and Nexium and other similar heartburn drugs faced more risk of kidney injury and kidney failure. (CMAJOpen.ca)

Prilosec and Nexium Use Tied to Kidney Failure Risks

The above scientific findings come as there are more Prilosec lawsuits and Nexium lawsuits being filed across America against the makers of PPis. The personal injury and product liability lawsuits allege that drug makers were aware of the risks of taking PPIs long term, but withheld important safety information from consumers.

In 2014, FDA mandated that drug manufacturers add a heartburn drug warning about a higher risk of C diff associated diarrhea. FDA also stated that both Nexium and Prilosec are linked to reports of acute interstitial nephritis. This condition involves inflammation of the kidneys that can lead to serious health problems.

These communications from FDA five years ago were the first indication consumers and doctors had that PPIs could cause kidney damage. Many critics argue that this important information was buried in drug information and warnings and did not receive enough attention.

Prilosec and Nexium May Be Dangerous Drugs

There have been hundreds of personal injury and product liability lawsuits filed in recent years against the makers of both drugs, with the intent of obtaining large payouts and settlements for patients who have suffered serious health consequences from taking the drugs. Plaintiff attorneys in Prilosec and Nexium lawsuits have alleged these points:

Prilosec vs Nexium Injuries and Side Effects

Patients have recently filed Prilosec and Nexium lawsuits because of serious health consequences they suffered from taking either or both drugs for a year or more. The most serious problems are kidney failure, kidney disease, bone fracture, stroke and heart attack.

People who take the drugs every day or for more than a year have greater risk of bone fracture; this problem is more prevalent in people 50 and older. There also is a 20-50% greater risk of kidney disease and failure. Patients also have a 30% higher chance of having a stroke.

It is strongly recommended to talk to your doctor today if you take Prilosec or Nexium and have any of these health problems:

Additional information about the many health problems related to taking Prilosec and Nexium include:

As major health problems are becoming clearer from taking both PPIs, patients have been filing personal injury lawsuits to be paid for their huge medical costs, lost wages, pain and suffering and loss of enjoyment of life. If you have suffered kidney disease or kidney failure from taking Prilosec or Nexium, you may want to file a lawsuit to receive compensation for your injuries.

Kidney disease and kidney failure are major health problems that can harm your life for years to come, which is why people harmed by these drugs want a payout or settlement from the drug manufacturer. Consider:

Speak to a Prilosec and Nexium Kidney Disease Attorney Today

PPIs are commonly prescribed to millions of Americans every year. They are at higher risk of major health problems: kidney disease, kidney failure, acute interstitial nephritis and acute kidney injury. Patients who have endured these painful side effects may be able to join an ongoing Prilosec and Nexium lawsuit. If you can prove you have suffered injuries related to taking either drug, you may be eligible for a Prilosec or Nexium payout or settlement for:

You Could Receive a Lawsuit Settlement for Your Health Problems

Note there have not been any Prilosec or Nexium lawsuit payouts and settlements yet. AstraZeneca is the manufacturer of both drugs, and no settlement has yet been offered to patients.

But PPI drug makers have paid billions in past settlements. You could receive compensation if you join ongoing litigation involved with these PPIs. It is smart to begin your own legal process as soon as you can so you can increase your chances of being part of a future payout or settlement.

If a settlement is eventually offered, you may be able to get compensation for that pile of medical bills, your weeks or months of lost wages, and your mental and physical pain and suffering from kidney disease or kidney failure.

It is important to speak to a skilled defective drug lawyer if you have kidney failure or kidney disease associated with Prilosec or Nexium use. If you have questions about filing a claim, please contact our law office for more information. 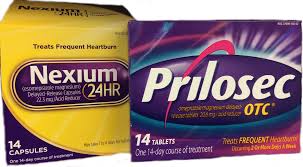