The U.S. Centers for Disease Control and Prevention (CDC) has stated that 1 in every 33 babies in this country is born with a type of birth defect, which means something went wrong with the development of the baby in utero. Birth defects can range from very minor to very severe and they can affect any part of the human body. Effects can be observed on organ function, external appearance, mental development, and physical development. In most cases, a birth defect will start within the first three months of pregnancy, which is when all the organs start to form. Sometimes, these defects are completely harmless. But at other times, they can lead to a need for lifelong medical care or even death. In fact, the leading cause of infant death in this country is severe birth defect. Twenty percent of all infant deaths are related to this.

There are a number of possible causes for birth defects. These can be a result of behaviors and lifestyle choices, genetics, exposure to chemicals and medication, or all of the above. There are also many situations in which it simply isn’t known what caused the birth defect. Let’s take a look, however, at the major causes as they are known today.

Either the mother or the father of the baby may have genetic abnormalities that can be passed on to the unborn baby. Sometimes, parents are aware of having these genes, but sometimes they don’t. Unfortunately, when the genes are the cause, it is often impossible to prevent the defects from occurring. More worrying is the fact that these genetic factors can lie dormant, which means they can skip one or even several generations. It is also possible that it is the very combination of the parents’ genes that leads to a birth defect, meaning they would not have had this problem if their partner was different.

The five most common genetic birth defects are:

It is very difficult to accurately determine the specific medication or chemical causes of a birth defect. This is because it is not uncommon for a woman to take certain medication just before or during her pregnancy. This means that any study will have to rely in full on the memory of the mother in terms of the substances she took during pregnancy. However, there have been times when it has been demonstrated that a medication definitely caused birth defects, such as in thalidomide, which was prescribed to women in the 1960s to treat morning sickness. It was found that the drug could lead to babies being born with complete or partial absence of their legs or arms.

A number of other drugs have now been accepted as being the cause of certain birth defects. These include:

3. Smoking, Alcohol and Other Drugs

It is a known fact that alcohol can cause various congenital abnormalities at many different stages throughout pregnancy. In fact, even small amounts of alcohol can cause various problems in an unborn child. These abnormalities include such thing as deformed arms, legs or face, mental retardation, heart conditions and fetal growth restriction. However, this is not overly common. It is more common in children born to heavily drinking women to have behavioral and cognitive problems. These disorders all come under what is known as fetal alcohol spectrum disorder.

Smoking cigarettes is known to cause premature birth and growth restriction. Additionally, it can cause problems in the respiratory system, cardiovascular system and brain development. These issues can be caused by a smoking mother, but also through exposure to second hand smoke. Babies of smoking mothers tend to have tremors, an increased startle reflex and other problems. The more the mother smokes during pregnancy and the length of time she has been smoking in total are vital factors in determining how bad the baby will be affected.

Drugs, such as amphetamines, like speed, stimulate the person’s central nervous system. If taken during pregnancy, premature birth, intracranial bleeding and low birth weight are common. Opioid drugs, meanwhile, can lead to premature birth, fetal growth restriction and low birth weight. Opioid drugs include methadone and heroin. Cocaine is also known to cause a range of problems in pregnancy. These include a heightened chance of miscarried, fetal growth restriction and developmental problems with the genital tract and urinary system. The link between cocaine and birth defects is well documented. Microcephaly (a brain that is too small) is common and it is known that children who were exposed to cocaine in utero have an increased chance of developing neurobehavioral problems. Additionally, there is an increased risk of placenta abruption, which is where the placenta ruptures from the womb. This is almost always fatal for the unborn child and can lead to serious complications for the mother as well. Newborn babies born to mothers who used cocaine are often jittery, experience increased startling, and have an excessive sucking reflex.

One of the most worrying things about drug use during pregnancy is that it can lead to neonatal abstinence syndrome, which basically means that babies are born addicted to whatever drug their mothers took. Once they are born, they will be physically dependent on the drug and they will have to go through full withdrawal.

There are also a number of environmental chemicals that can cause congenital abnormalities. One such chemical is mercury, which is found in fish. This has been linked to mental retardation, as well as neurological problems that are very close to cerebral palsy. Another chemical is lead, which is associated with neurological disorders and fetal growth restriction. PCBs (polychlorinated biphenyls) have been shown to cause skin discoloration and fetal growth restrictions.

X-rays can cause significant birth defects, including fetal development problems like cleft palate, spina bifida, abnormalities of the legs and arms, blindness and microcephaly (where the brain is too small). The kind of abnormality that the unborn baby is likely to develop depends on how much radiation the pregnant woman is exposed to and at what point during her pregnancy. No current guidelines exist on what a safe dose of x-ray radiation actually is. However, dental cleanings and dental x-rays are classed as safe. If you are asked to have an x-ray done during pregnancy or if you think you’re pregnant, you must speak to your healthcare provider.

These types of treatments are used to treat cancer. Unfortunately, they can also cause various birth defects. If possible, therefore, a pregnant woman should delay her cancer treatment until after the baby has been born. During those times when this is not possible, it must be decided whether the possible benefits of the treatment outweigh the associated risks to the unborn baby.

6. Infections in the Mother

There is a group of infections that are known to often lead to birth defects. The acronym for these infections is ‘CHEAP TORCHES’. These are:

C – Chickenpox and shingles
H – Hepatitis B, C, D, E
E – Enteroviruses such as polio virus
A – AIDS
P – Parvovirus B19, which is the 5th disease

T – Toxoplasmosis
O – Other infections, such as group B streptococcus, Listeria and Candida
R – Rubella
C – Cytomegalovirus
H – Herpes simplex virus
E – Everything else that is sexually transmitted, including chlamydia and gonorrhea
S – Syphilis

Syphilis, herpes simplex virus and hepatitis B are all sexually transmitted diseases. Chicken pox is a type of virus that is only risky to women who have not had the disease themselves, or who haven’t been properly vaccinated. (See shingles vaccine lawsuits). All CHEAP TORCHES infections are associated with birth defects, which include learning problems, mental retardation, anemia, jaundice, vision problems, low birth weight, heart defects, deafness, and skin rashes. Additionally, they are often linked to stillbirths. The babies who are the worst affected by these infections are those who were exposed to CHEAP TORCHES during the first trimester, when their bodily structures for organs are developing.

There are also a number of chronic illnesses that a mother can have that increase the chances of developing congenital abnormalities, diseases in unborn babies and fetal growth restriction. Sometimes, the risk is caused by the medication used to treat the condition itself, and not by the illness. This is why, if you suffer from any type of illness, whether medicated or not, you should always discuss a plan of action with a medical professional to help protect yourself and your unborn baby. 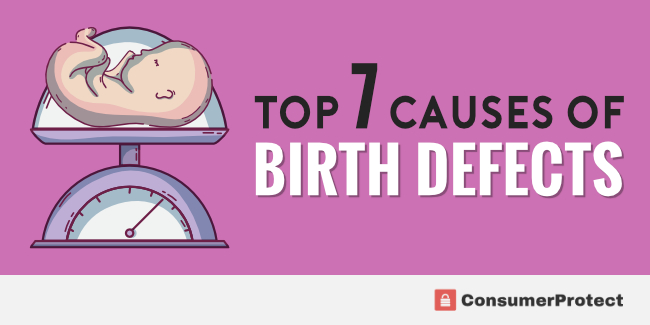